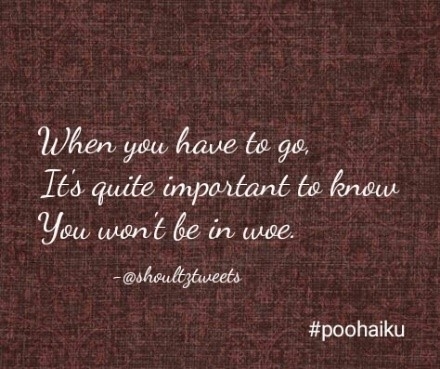 Don't let this haiku intimidate you. Rhyming is totally optional!

Announcing the return of our beloved Poo Haiku campaign has been a reward in and of itself. Much as I love poo-etry, my enthusiasm is often eclipsed by DefeatDD partners and colleagues.

We’ve been thrilled by the number of poo-ems we’ve collected over the years – around 200 or so! – but I think, with your help, we can make this our best year yet. A little social media detective work reveals that while people are quick to wax poo-etic about the campaign itself, they can be more hesitant when it comes to sharing their own poo-ems.

I get it, and actually, I have a confession: Throughout our campaign development process, I spent my creative energies finding clever ways to avoid contributing my own poo haikus. My excuse is that as a founding member of the DefeatDD team and noted punster, I felt the crushing weight of high expectations. Paralyzed by the fear of failure, I delegated the drafting of the sample haikus to the capable creative prowess of @amayaerika_ -- problem solved.

Then fate intervened. With the news of our dear friend and colleague Deborah Kidd’s departure, we thought it fitting to bid her farewell with a list of haikus. I knew there was no way I was going to apply my creative energies to sneak out of that.

I set some time aside on a Monday evening, settling in on my couch with some tea and some soothing ambient light. I realized that as soon as I took the pressure off of myself that the process actually became quite fun… even addictive! I may not be the best poet, but thankfully poo-etry has nothing to do with literary mastery. It just takes passion for the issue!

With this newfound realization in mind and as a haiku skeptic turned evangelist, here are my tips for creating winning poo-ems:

1) Don’t overthink it! Turns out you really don’t need tea and soothing ambient light if they’re not immediately accessible. Just pick an angle that inspires you (or makes you giggle) and then start playing with the syllable count. A helpful method for me was to write a few sentences about my main message, then distill it into haiku format.

2) Read sample haikus. We Erika has done all the heavy lifting for you on this one! I found that reading several haikus helped give me a sense of the cadence of 5-7-5 syllables and allowed me to ballpark estimate my lines before I word-smithed my way toward a final creation.

3) Remember: It’s haiku for a cause! It was the experience of writing a farewell haiku for Deb that reminded me of what should have been obvious from the beginning: It’s not about creating a world-class haiku. It’s about drawing attention to something important in a fun and creative way, which is the heart of what we do at DefeatDD. It takes the pressure off when you remember that every haiku you write helps us call for greater attention to the global burden of diarrheal disease.

A chain reaction starts with
The smallest of steps

It’s about you, but
It is mostly about poo
Help us make a stink!

You’re inspired, I know it! Don’t wait; share your #poohaiku with us! We will love it!