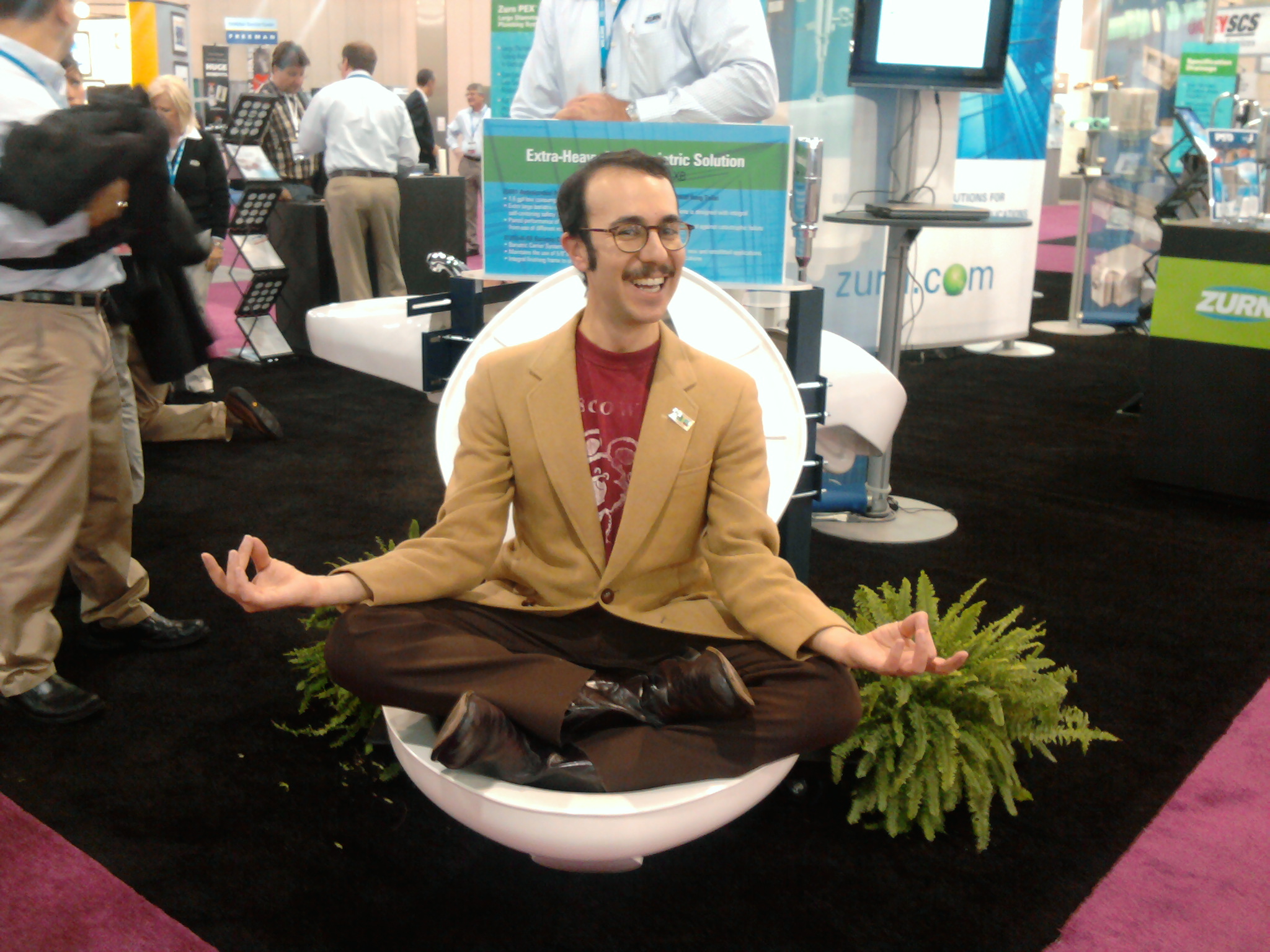 In this photo, Shawn Shafner, founder of The POOP Project, meditates about cultural healing on a Zurn toilet at the 2010 American Society of Plumbing Engineers Conference in Philadelphia, PA.

My sister Shannon was an expert. By the time I started Kindergarten at Trails West Elementary School, she could already make macaroni and cheese almost by herself. Shannon was an experienced, refined 5th grader, and she told me all about how I should stand in line at lunch, and raise my hand, and not talk maybe for like once in my whole life if it's even possible or else I would get my name on the board and have to stay in during recess and so I was going to RAISE MY HAND!

Shannon watched over me and made sure everything went alright at school.  She made sure to tell everyone, “That's my little brother Shawn.  Yeah, the short one.  He's such a dork.”  It was great having a big sister.

One morning, Shannon woke up with a bad case of diarrhea.  Mom wrote a note for me to take to Mr. Andrews, her teacher, explaining that she had “a stomach bug” and that I was to be entrusted with her homework.

Looking back on what happened next, I'm not exactly sure how to justify my actions.  Maybe I did it because I was underslept and my judgment was a little cloudy. Or perhaps I resented my mom making me my sister's keeper. Most likely, I just did it because I love getting attention.

When I opened the door everyone was already seated, and Shannon's classmates turned their heads to see who it might be.  The spotlight was on me.  Mr. Andrews smiled and, seeing the note in my hand, asked me where Shannon was.  I took a deep breath, faced the crowd and said: “She has explosive diarrhea.”

When Shannon found out about it from her friend Katie later that day, she didn't think it was so funny.  It didn't make her laugh when the kids reminded her about it at school the next day either, or even give her a chuckle at any point in the week that followed, until Brian Henderson came to school for Pajama Day with curlers in his hair, and immediately became the new topic of everyone's conversations.

It's been years since that story took place, and now I, like my sister, have become an educated adult. But I still find myself talking about diarrhea. A lot. In fact, I think most people don't talk about it, or its firmer, brown brother, enough, which is what led me to create The People's Own Organic Power Project (www.thePOOPproject.org). We use art, education and humor to heal the cultural shame that makes potty talk taboo, promoting critical conversations about sustainable sanitation for the person, planet and world community.

As you might imagine, telling people that I do this thing about bathrooms, toilets and poop normally leads to an uncontrollable fit of giggles or, on occasion, one suspiciously raised eyebrow.  In modern society, toilet rituals are considered private.  We've all sort of signed on to this unseen contract promising that whatever happens behind the stall door stays behind the stall door. But everyone uses the same stall, right?  And for the same reasons, right?  So…what exactly is the secret?

It's only because of that taboo surrounding poo that everyone laughed at a Kindergartner who, though he may have had good timing, was only telling a simple truth. And it's only because stool maintains such a low status in our society that my sister, suddenly outed to be the kind of person who'd have such a “disgusting” yet universal problem, was made to feel ashamed for it. And it's these same taboos, smirks, censors and feelings of embarrassment and shame that often prevent us from acknowledging the hard fact that every day, 4,000 children die from the same diarrhea that kept my sister home from school.

Every day, The POOP Project, the people at DefeatDD and many other organizations around the world are working hard to ensure that this message is heard, and that the 42% of the world's population currently living without access to safe sanitation have an advocate on their side. It's a difficult message to get across, what with our busy lives, complicated political climate, and celebrities “winning” and generally running amok.  The topic makes people uncomfortable and embarrassed; we often get laughed at, scolded, told to quit being inappropriate. So how are we to solve a problem we can't even talk about?

The silence that surrounds our natural bodily functions may feel familiar and cozy, but it also contributes to the sanitation crisis affecting almost half the world. You can help to change that, and it couldn't be easier.  Simply find a friend, a loved one, or a stranger on the bus and start a public conversation about our often private business.  Tell them about why toilets are so important for health, and give them the facts about diarrhea. Send them to DefeatDD.org for more information and to The POOP Project for cultural healing.  I know it might feel scary to talk toilets with someone else, but look on the bright side—they're guaranteed to start chuckling as soon as you bring it up. Unless, of course, you're talking to my sister. She doesn't find it funny.

Wishing you all the best, and peaceful pooping.

·         Check out facts and figures on safe sanitation… and the dangers when its inaccessible.

·         Still stumped? Here are some helpful guidelines for starting that awkward conversation.