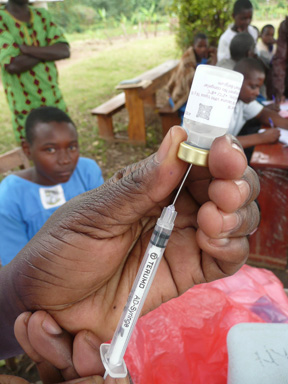 PATH's Vaccine Development program improves the health of people, especially infants and children living in low-income countries, by accelerating development of vaccines that will be effective and affordable in the countries that most urgently need them.  From the program's first project on pneumococcal vaccine development, it has expanded to include vaccines against rotavirus, enteric diseases due to Shigella and enterotoxigenic Escherichia coli (ETEC), influenza, and Respiratory Syncytial Virus (RSV).

The staff members and talent of PATH's Vaccine Development program are as wide-ranging as the issues they address. It takes planners, dreamers, technicians, scientists, strategists, lawyers, regulators, managers, number-crunchers, communicators and advocates to ensure that the vaccines are developed and the road is safely paved for those vaccines to reach children in the developing world.

Today our blog features a few of those staff:

Kalpana puts her extensive technical background on vaccines to work from Mumbai, India on the rotavirus vaccine development project, which is developing new vaccines against rotavirus, the leading cause of child death from severe diarrhea around the world. As the Senior Clinical Project Manager, Kalpana plays a critical coordinating role among a multitude of partners: clinical sites, research organizations, a laboratory, external experts, and many others.

Kalpana brings a wealth of experience in other vaccine areas and clinical trials to her current work on rotavirus. She has worked on malaria vaccine development, Japanese encephalitis, and a vaccine against leishmaniasis, a parasitic disease that affects millions around the world in poor countries. She has also been involved in a very important Gates Foundation project for mapping the regulatory process in India for product approvals. But what inspires her every day is the opportunity to be part of a program that is developing rotavirus vaccines that could save infants' lives and prove affordable for developing countries. In her free time (could there be any?), she loves to laze around and play with her nephew - and of course she is committed to escaping the heat of Mumbai to vacation with her family.

As an accomplished skier who has been regularly barreling down sides of the French Alps for most of her life, Muriel knows what it takes to forge new territory with speed and precision. It's those same qualities necessary to keep all the engines running behind the scenes for vaccine development, and Muriel plays that role as Program Manager for PATH's rotavirus vaccine development project. Any given day might be filled with planning new activities for the program, ensuring travel arrangements, completing administrative tasks that are necessary to ensure that the technical activities are completed on time and up to standard - and ensuring appropriate coordination and information sharing among the team. You also might find her poring over a report, to a donor or a partner, to ensure that all the project's stakeholders stay up-to-speed on the latest developments. Her favorite part of her job is planning important projects that require her to bring together many levels of expertise and work around challenging constraints to achieve one final goal.

Muriel has always loved a professional challenge. With PATH for 10 years, she started as a program assistant for the Meningitis Vaccine Program during its inception. From that vantage point, she was able to experience the entire life-cycle of development of a vaccine - including the technical, scientific and political aspects of the process.  Now as a Program Manager, she isn't planning to slow down anytime soon: She has just begun a Master's program in Business Management and Administration at Geneva University (HEC Executive). In her free time, she stays active: She's competed in several triathlons, and still finds time to visit her favorite haunt - the mountains - whenever she gets a chance. She is mother to two boys, ages eight and five.

In 1990, Dick Walker travelled to El Salvador. The country was in the midst of a civil war, but what he remembers best was talking to a woman about the value of local development of medicines for communities in the country. As a scientist with expertise in enteric vaccines, that conversation spurred him to wonder, “Could it be possible to develop vaccines for diarrheal diseases that could be manufactured in low-income countries like El Salvador?”

Twenty one years later, as the head of PATH's enteric vaccine project, Dick is hoping to answer that question in the resounding affirmative through vaccine candidates the program is currently exploring for ETEC and Shigella, which are two major bacterial causes of diarrhea in developing countries. Between 1990-2007, he retired from the Navy, and spent time in biotech, and then at the FDA. “But,” Dick says, “All my work since that trip to El Salvador has been focused on fulfilling this dream of getting vaccines to children in developing countries.”

Dick daily keeps the EVI program on track - consulting with his staff, initiating new activities, and ensuring that the team is delivering on its strategy. A favorite part of his job is the excitement he gets from seeing a success in the vaccine development process. In his spare time, Dick also enjoys nature photography; on an upcoming trip to India, he hopes to photograph tigers in the wild.

Every day in PATH's Influenza Project, Program Assistant Dave Oxley plays a key role to keep the machine of influenza vaccine development oiled and running - scheduling meetings, distributing agendas, managing calendars, and preparing reports for his colleagues. As a master multi-tasker, he juggles a wide array of responsibilities and roles every day; you might find him managing an online portal, proofreading materials, or prepping scientists and technical experts for meetings and briefings. He enjoys lightening the admin load for his colleagues - helping make others, as he says, more effective in their work. With a diverse team spread out across the globe, he also focuses on ways that new communication technologies can make collaboration and coordination easier and more cost-effective.

Despite his behind-the-scenes role in the office, Dave takes center stage when it comes to one of his favorite hobbies - baking. His breads and cherry pies have won numerous accolades in Washington and around the country, and his recipes have been featured twice in books in the Old Farmer's Almanac Home Library. All this from a humble baking beginning: Dave learned to make bread from a video he checked out at the local library. Now that the secret is out, Dave is bound to be seeing more and more hungry colleagues visiting his desk!

-- Preparing a better future for children isn't just our job: it's yours, too! Learn how you can take action.

-- Worldwide rotavirus mortality remains high, according to a study published in the Lancet. Now is the time for rotavirus vaccines.