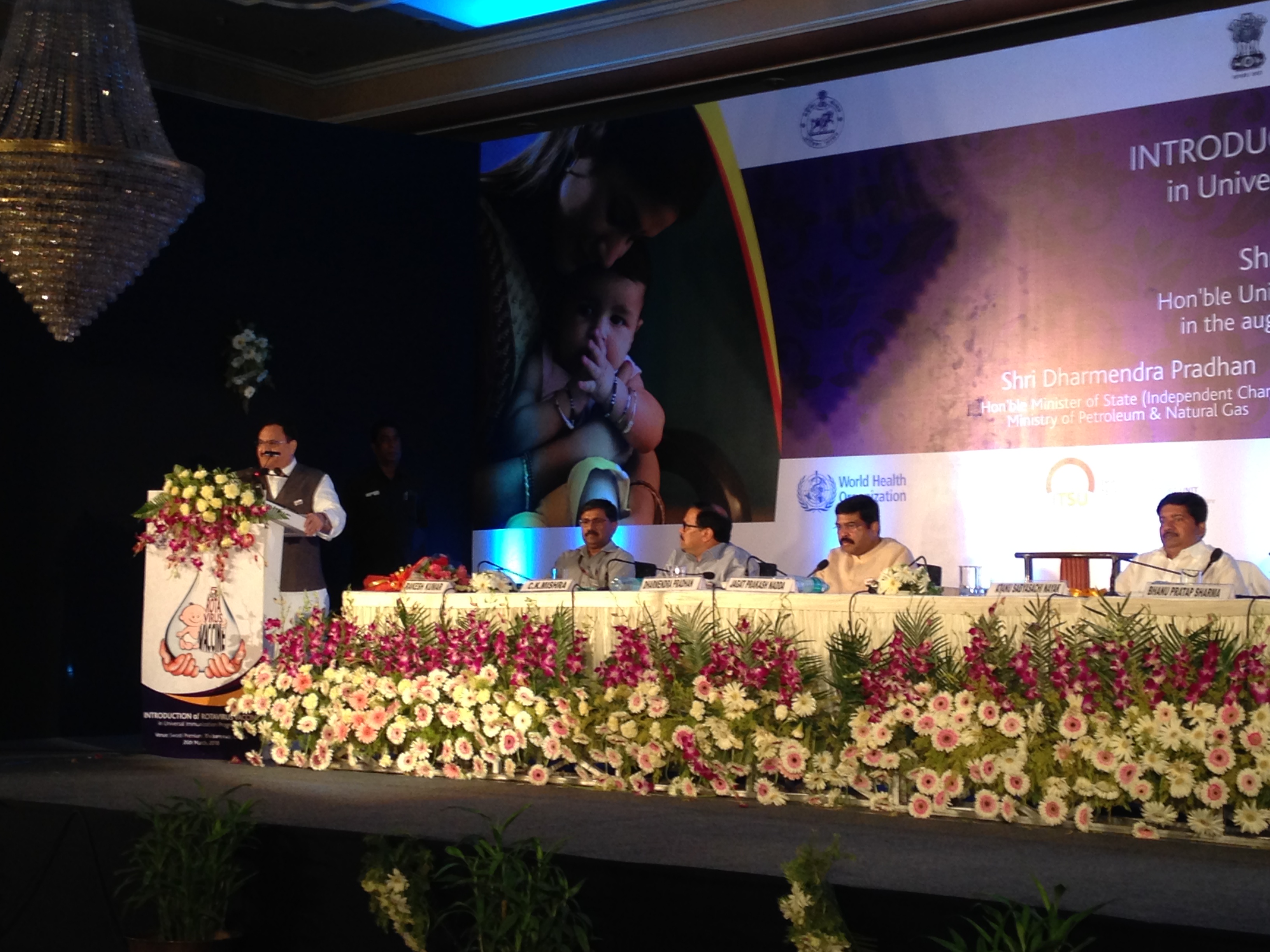 On March 26, 2016, India joined the growing number of countries that have introduced rotavirus vaccine into their national immunization programs. The Indian Minister for Health and Family Welfare, Mr. JP Nadda, launched the rotavirus vaccine through the Universal Immunisation Programme (UIP) in Bhubaneswar, Odisha. Mr. Nadda called it a "historic" moment and an "exemplary" step in India's immunization programme as well as an essential investment in children, the future of the country. Union Minister of State Dharmendra Pradhan, and Atanu Sabyasachi Nayak, Minister of Health and Family Welfare (MoHFW) in Odisha, were also in attendance at the launch event.

In the first phase of the roll-out in the UIP, besides the eastern state of Odisha, the vaccine also will be provided to children in the southern state of Andhra Pradesh and the two northern states of Haryana and Himachal Pradesh. Later, the roll-out will be expanded across the country. The vaccine, called ROTAVAC®, is an indigenously developed vaccine that was licensed by the Drugs Controller General of India in 2014.

Rotavirus accounts for approximately one-third of the nearly 600,000 global child deaths attributable to diarrhea. Ninety-five percent of these deaths occur in developingcountries.  The impact of rotavirus vaccines on the burden of diarrhea has been dramatic in countries that have introduced the vaccine.

India continues to have one of the highest rates of diarrhea in the world. Along with pneumonia, it is one of the leading causes of child illness and death, and rotavirus is the most common cause of severe diarrhea. In India, an estimated 11.37 million episodes of rotavirus gastroenteritis occur each year, with 78,000 cases resulting in death.  Rotavirus is responsible for almost 40 percent of diarrhea-related hospitalizations in India. That is a total of 291,756 hospitalizations each year.

At the launch, Dr. CK Mishra, Additional Secretary and Mission Director National Health Mission, MoHFW, stressed that the introduction of the rotavirus vaccine in the UIP had strengthened health systems and this would faciliate faster introduction of other new vaccines like the pneumococcal vaccine.  Dr. Bhanu Pratap Sharma, secretary health, MoHFW emphasized that the cost effective vaccine would not only reduce under-five mortality but pave the way for achieving the Sustainable Development Goals.

While rotavirus diarrhea can be treated, the urgent medical care needed is not always accessible to many children, especially among poor populations in India. Vaccination is, thus, the best way to prevent death of infants from severe diarrhea caused by rotavirus.

And, now India has just joined the ranks of 80 other countries around the globe who are helping to save the lives of their children from this terrible disease.