An echo and an alarm 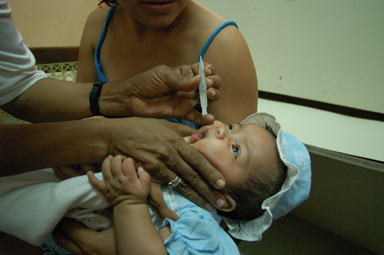 Sometimes, our work in global health seems to happen in an "echo chamber," where information, ideas, or beliefs are amplified or reinforced by transmission inside an "enclosed" space.

Among the scientists and public health experts committed to fighting one of the leading killers of children, there is an echo growing in intensity with each reverberation. Rotavirus has been a scourge among children, leading to countless hospitalizations and over half a million deaths each year, mostly in the poorest countries of the world. In the face of this terrible disease, there is a growing echo of hope: new vaccines are delivering on their promise to reduce suffering and death.

Wherever these new vaccines are introduced, scientists a dramatic and rapid decrease in the number of children suffering from severe rotavirus diarrhea. The United States, Australia, Brazil, South Africa, Mexico, El Salvador, Nicaragua… again and again, hospital beds that for countless years have been filled with children suffering the devastating dehydration caused by rotavirus are emptying at a dizzying rate. Hospital wards once filled with listless, apathetic children tied to intravenous tubes and watched over by distraught and worried parents are now quiet and empty.  Echos of pain and hurt have been replaced by the chatter of thriving children and the relief of grateful parents.

I count myself as one of those dedicated to bringing rotavirus vaccines to those who need them most: children living in the poorest countries of the world. Often I find myself in that echo chamber of scientific publications and research meetings, where stories about the impact of the vaccines are swapped, analyzed, and celebrated. And, today, it is an exciting place to be, with sounds that hearten me and renew my commitment to this mission. Encouraged by the data, those in the know are convinced.

Now is the time to throw open the doors of that echo chamber and let the sounds of success resonate everywhere. During these difficult times of global economic distress, natural disasters, and increasing intolerance, this note of hope that should be heard by everyone. Open your ears, quiet your thoughts for a moment, and you may hear it.

But an alarm bell is sounding, too. The children at most risk from this killer disease, the ones most forgotten and invisible, in remote and poor parts of the world, may not receive rotavirus vaccines any time soon. The pledge from the GAVI Alliance to support developing-country introduction, the best hope for amplifying this signal of hope, is not yet accompanied by the funds necessary to deliver it to the poorest countries. While recent efforts to secure donor commitments have slightly increased the volume, resounding support from the global donor community remains elusive.

Your voice can help. Tell the politicians and global decision-makers that hold the purse-strings to do what it takes to bring rotavirus vaccines to all children. Use the power of your voice to sustain the note of hope where it is needed most.