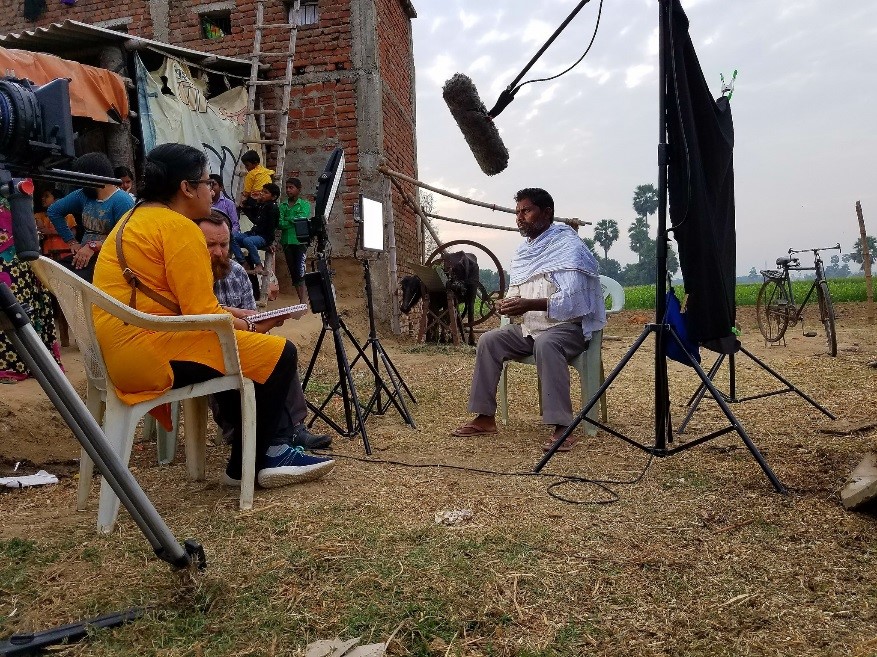 Earlier this year, the DefeatDD team journeyed to India to gather stories about the burden of diarrheal disease and the continued need for integrated approaches to prevent the vicious cycle of malnutrition, poverty, and poor health.

While the burden of diarrheal disease in India is among the highest in the world, the national momentum for child health and the programs that are already saving lives filled us with optimism and are a beautiful demonstration of what is possible with the right investments. We hope this video series conveys the inspiration we brought back with us.

Video 1: “Health is our right”: India's momentum against diarrhea

Hope: We hit the jackpot with partner interviews, but I was personally awestruck by Neerja Chowdhury, a political commentator and journalist who has been a passionate advocate against child malnutrition for 30+ years. I was grateful for the opportunity to feature so many Indian voices in these videos, especially Indian women.

Erika: One of my favorite parts of filming at Lok Nayak Hospital was the colorful murals. We were in the outpatient pediatric ward, and far from being a cold, clinical setting, the bright colors and reflections in the shiny floors made it feel light, pleasant, and welcoming. I think this must be a great comfort to the families who receive care there. Another point I want to mention is that our film crew went to great lengths to get some of the stunning shots seen in the videos, even climbing up on the rooftop of an accommodating neighbor. The climb wasn’t too scary, though. A crowd of neighborhood kids even joined our filmmaker up there so they could take in the view too.

Sushmita: It was heartening to hear the cross section of India’s doctors, WASH implementers, and community nailing in repeatedly the hope that things are way, way better in India than several years ago. However, there is a long road to cover given that the effects of episodes of diarrhea cannot always be seen and manifest themselves within an ailing child.

Video 2: “A healthy start to a new generation”: Stopping the cycle of diarrheal disease

Hope: One of my favorite moments of this trip was visiting Save the Children’s mother’s group. We stopped our car in the middle of a bustling informal settlement and found the group of mothers nestled apart from the chaos in a tiny bright green room behind an open garage door. In this unassuming and easily bypassed corner, mothers were learning lessons that could very well save their children’s lives. I captured this video to remember their energy, the vibrant colors, and the adorable little boy who stole my heart (he appears at the end of the clip).

Erika: Similarly, one of my highlights of the trip was stopping by a children’s hygiene club run by Save the Children’s Stop Diarrhoea Initiative. The children were so cute in their eagerness to answer the teacher’s questions and demonstrate what they’d learned. They even performed a song about proper handwashing technique. At the end of the meeting, they stood in two lines facing each other and repeated in unison, “Club… School… Community!” On each word, they took a step forward, and on, “Community,” they hugged each other. It was so sweet and such a simple way of demonstrating how the lessons bonded them as a club, not just at their meetings, but also at school and in the community they share. In another place that we visited with PSI, we saw children engaged in a game of rolling around on barrels typically used for water storage. Through the eyes of the children, you could imagine the barrels becoming fantastic objects, and their antics were very entertaining. Nearly every kid joined in the rolling, crawling, and climbing at some point. For me, it was a touching reminder that the natural instinct of every child is to be playful and exuberant, and it drives home the idea that staying free from diarrhea isn’t just about helping kids survive, it’s about giving them the chance to have happy, healthy childhoods.

Sushmita: Dr. Ganguly’s message – that diarrhea has horrendous effects –  is etched in my mind. It reminds me every day of the importance of the work that DefeatDD does and why we need to continue doing what we are doing.

Video 3: The impact of a toilet: A family story

Hope: Avdesh is a cement worker, and I loved that this personal trademark set his family’s latrine apart. I’ll also never forget the size of the crowd who gathered to watch us set up for this interview.

Erika: It would be an understatement to say the Kumar family was welcoming and accommodating. Though we pre-arranged a window of time to meet, Avdesh was still at work that day, and when we arrived, he’d just poured cement that needed attending. Rather than leave us in a lurch faced with dwindling daylight, he graciously agreed to return to the cement after our interview. Funnily, we had a blooper reel moment while we filmed at the Kumar family farm. As you might notice, there’s a water buffalo in the background of his interview, one of the family’s livestock. At one point, the water buffalo knocked down part of his shelter, nearly taking down the structure. We had to pause so Avdesh and his wife Sunita could fix the buffalo’s restraint and pick up the fallen pieces. Thankfully we still had enough daylight to finish the interview and allow Avdesh enough time to finish his cement mixing.

Sushmita: When a head of a family says, “We were probably falling ill because of the lack of hygiene,” and makes the connection that a toilet saves time for children to study (because they can quickly use a toilet instead of wandering outside in search for a safe place), we knew that Avdesh was a changemaker. His wife Sunita’s worry about exposing both her sons and daughters to taunts evidently was a constant push for the family to move ahead with their decision to get the toilet done on a loan.