5 films that put the “act” in Action! Skip to main content

5 films that put the “act” in Action! 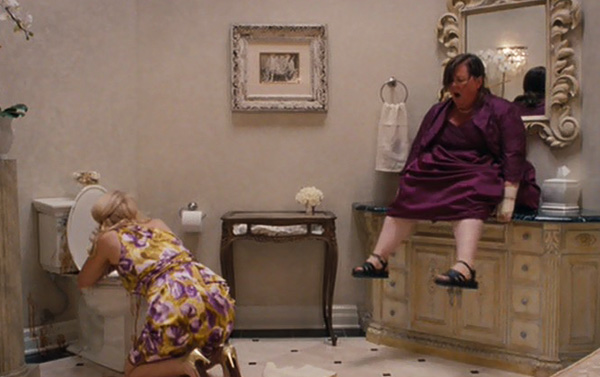 Pop your poop-corn! It's summer blockbuster season. Getting into the spirit, here's my list of five must-see films that drive home the importance of diarrheal disease (DD) control. Whether funny or tragic, these flicks make our job at DefeatDD a little easier by bringing the act of going into the spotlight. Instead of thumbs up, I'm using a traditional “toilet seats up” ( 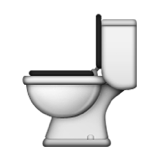 2 = “That's almost unbearable, but I could muscle through.”

3 = “I'd need to be treated for post-traumatic stress disorder.”

SPOILER ALERT! Some of the content below divulges plot points that might spoil the suspense AND your appetite. Consider yourself warned.

After being jilted at the altar, Carrie goes on her would-be honeymoon to Mexico with her three best friends Samantha, Miranda, and Charlotte. Charlotte accidentally gets water into her mouth during a shower and comes down with a mean case of traveler's diarrhea. The down side—she poops her pants in front of her friends. The up side—Carrie laughs so hard that she snaps out of her post-jilt funk. (I'll admit, that would have cheered me up too.)

The DD take away:  Don't drink the water … if you're not sure it's ok. Bacteria that sicken travelers also kill many thousands of children each year in areas with poor sanitation and limited access to clean water. Since vaccines against important causes of bacterial diarrhea like ETEC and Shigella don't yet exist, vaccine development is critical for giving children a first line of defense. 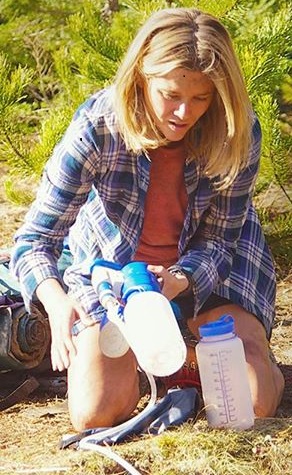 To find herself again after her mother's death and a self-destructive freefall, Cheryl hikes the more than 1,000 miles of the US Pacific Crest Trail—alone. Looking to avoid “beaver fever,” she battles a slow water purifier that gets clogged with pond scum, slow-acting iodine pills, and water shortages—learning the hard way about why clean water isn't something to take for granted.

The DD take away: Clean water = survival. But it's not easy to come by when at nature's mercy. Important for avoiding water-borne illness, water purification takes considerable effort and resources that are unavailable in many parts of the world. That's why simple, low-cost water treatment tools, like the SE 200 Community Chlorine Maker, are so vital for giving clean water to people that would otherwise be without. 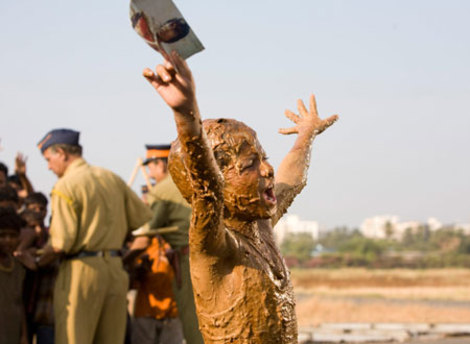 Jamal is about to win big on the game show “Who Wants to be a Millionaire?” when he comes under suspicion for cheating. To clear his name, he explains how his correct answers stem from his experiences growing up in India's urban slums. One story involves a young Jamal voluntarily jumping into the filth of a hanging latrine to get an autograph. Ack! Sorry, but ack!

The DD take away: Ok, whether or not jumping into a pool of poop for an autograph is worth it is beside the point. What's important is that hanging latrines are a common feature of urban slums that deposit waste directly into open waterways, enabling diarrheal and other diseases to spread. You don't have to fall into one to fall victim to its effects. Better sanitation options exist, but must be put within reach of the communities that need them for public health to improve. 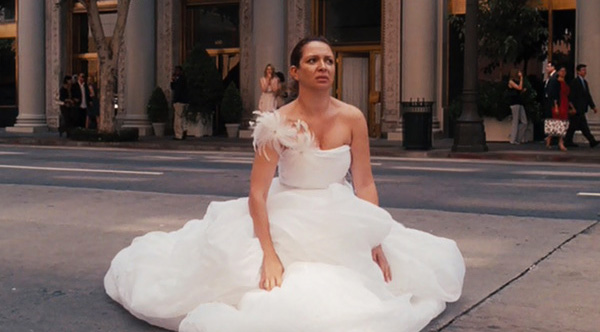 Broke, Annie hopes to affordably fulfill her maid-of-honor duties for her best friend's wedding, but unravels as she tries to keep up with the other, more extravagant bridesmaids. In one of her more cringe-worthy blunders, she hosts the bride and bridesmaids for lunch at a local hole-in-the-wall prior to wedding dress shopping. At the bridal shop you can see it coming, but can't look away as sweat beads, stomachs gurgle, and a wave of uncontrollable diarrhea hits each woman—making anything fair game to be used as a toilet (even a city street while wearing a wedding dress). Poo humor at its finest.

The DD take away: So, I realize this might not be the best example, but food-borne illness is truly no laughing matter. The dehydration caused by severe diarrhea is an all-to-common killer of children in the developing world. Rehydration is key, so tools like oral rehydration solution (ORS) can be lifesavers. 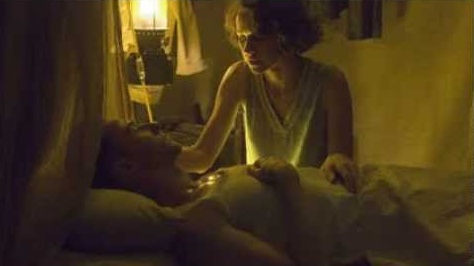 Walter (a bacteriologist) and Kitty (his unfaithful wife) have a bitter marriage, but find love against the backdrop of a cholera epidemic in rural China. Barely able to keep up with the stream of cholera patients, Walter discovers burials by the river to be the source of the epidemic and constructs a water purification system that saves the village. Tragically, he too contracts the disease and dies, but not before his selflessness earns Kitty's admiration and love.

The DD take away:  After emptying a box of tissues, the clear take away is the importance of proper disease prevention and treatment measures to avert public health crises. The severe diarrhea that cholera causes leads to more than 100,000 deaths per year. It can kill within hours if left untreated. In addition to clean water, ORS and vaccines are critical tools for staving off cholera emergencies, as is continued work on new drugs for infectious diarrhea that could bolster the toolkit.

If not for diarrhea, the classic scene where Indiana Jones cavalierly shoots the sword-wielding henchman would have been as forgettable as the credits. Why? Because Harrison Ford was suffering from dysentery and couldn't do the elaborate whip-sword fight scene that was planned. Instead, he just shot the swordsman and called it a day. The result, cinematic gold.

The DD take away: Diarrhea says, “You're welcome, movie fans.” 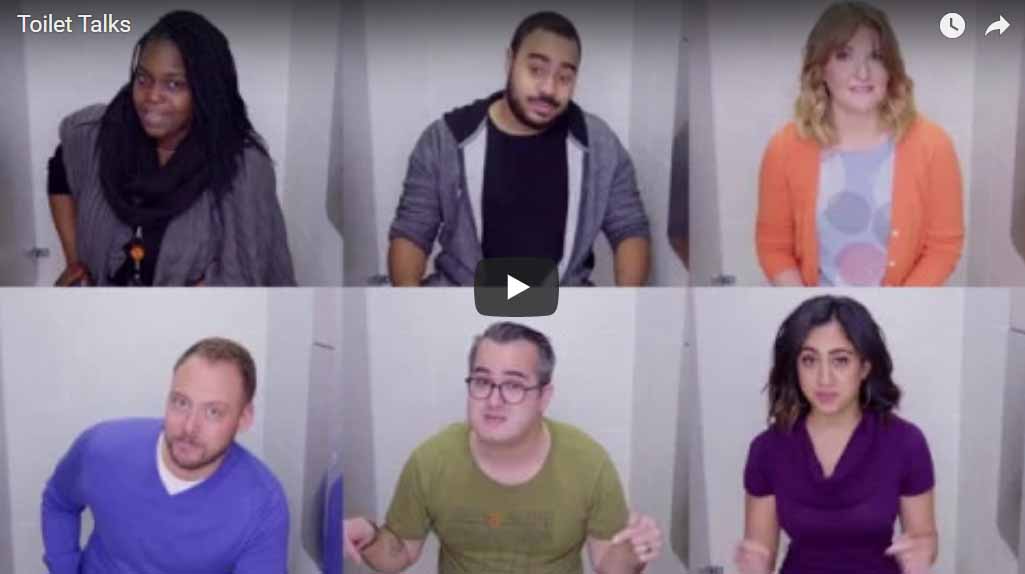 Toilet Talks
We need your help to make a stink about diarrheal disease and the solutions to defeat it: Create and share a Toilet Talk! 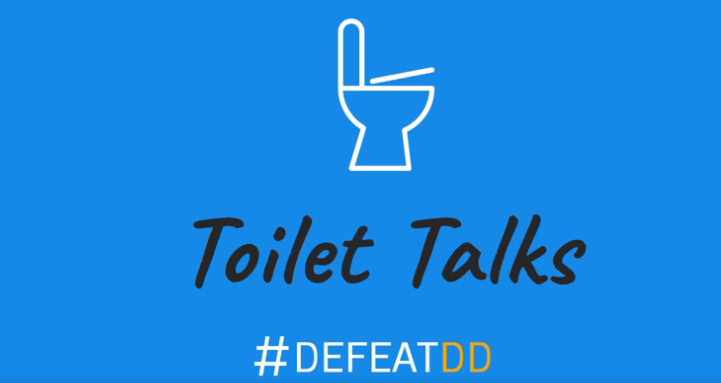