What's the correlation between hygiene and poverty? Skip to main content

What's the correlation between hygiene and poverty? 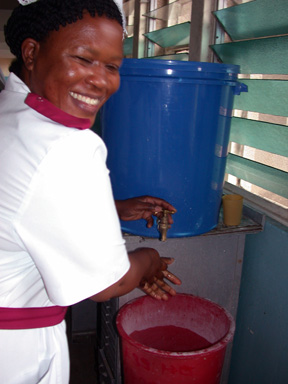 "You can be extremely poor but extremely clean." If there ever was a statement that dispelled assumptions about the correlation between hygiene and poverty, it was this statement from Rwanda's Minister for health in his opening remarks at a pro poor sanitation and hygiene workshop recently held in Kigali, Rwanda.

Poverty is usually associated with dirt and deprivation. It is often assumed that if one is poor, they are more unlikely to portray a clean, fresh appearance. In fact, coming to think of it, aren't we always so ready to judge people's socio-economic status by their appearance? Isn't the clean shaven man with well-manicured nails assumed to be of a higher economic status than the one whose physical appearance does not depict such attention to detail?

But is this really an assumption or a reality? Can one really be extremely poor but extremely clean? My opinion of the situation in Kenya is that people who lack basic hygiene and sanitation services such as clean piped water and personal toilets are more often those who live in informal settlements. Majority of the residents here cannot be classified as "rich;" if anything, they are the extreme opposite. Granted, hygiene is a very personal issue and must start with one's realization of the effect of dirt on health and social relations.  However, other influencing factors come into play.

Much as a poor person desires to be as clean as can be, it might be challenging when he lives in a one roomed shack with a wife, six children, no running water and a shared bathroom - and in this case, I am not referring to a bathroom shared with his family, but with hundreds of other residents living within the same radius. In many cases, there are no toilets (yes, you heard me right, no toilets at all)! So picture this, one answers a call of nature (use your imagination, but remember, there are no toilets!), and when he is done, has no hand washing facility or tap to do the needful….all because he couldn't afford to live anywhere else.

-- Watch how Kenyans are working together to defeat diarrheal disease.

-- Can you imagine a house without a toilet? It's the reality of 2.6 billion people. With the right investment, access to sanitation stands to make an enormous impact.

-- Want to help spread the word about the water and sanitation crisis? Our toolkit will help get you started.