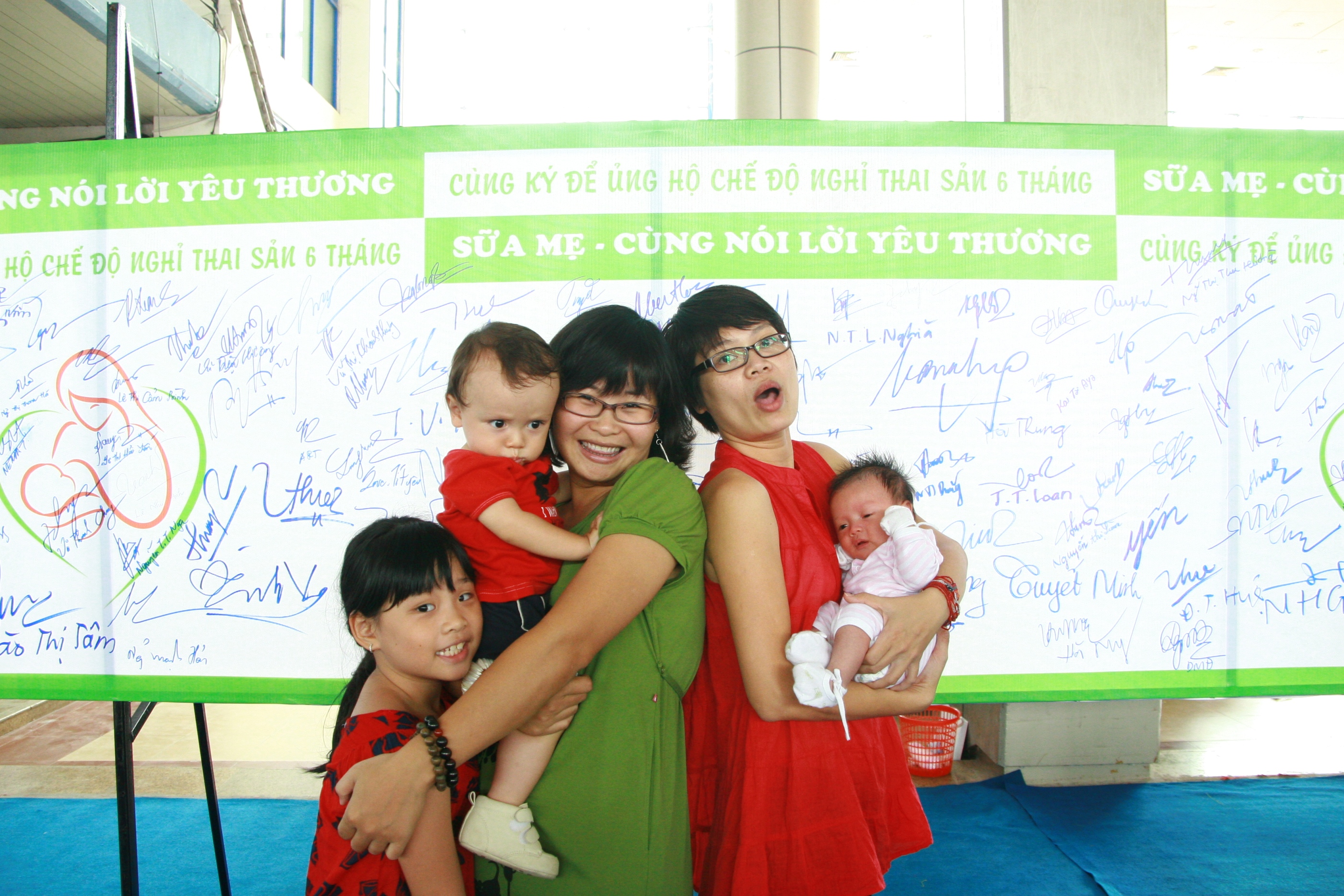 Advocates in Viet Nam in front of a pledge banner with hundreds of moms' signatures in support of six months maternity leave.

Exclusive breastfeeding for six months is one of the most effective ways to reduce a child's risk of diarrheal disease. In fact, up to 55 percent of infant deaths from diarrheal disease and acute respiratory infections may result from inappropriate feeding practices.

But many mothers throughout the world do not choose this life-saving practice because they don't have adequate social support. Outside influences—like misleading advertising of breast milk substitutes, or having to return to work before six full months of exclusive breastfeeding—can prevent mothers from making the best feeding choices for their infant.

This June, Vietnam's National Assembly voted in two landmark decisions for national-level policy changes to help create that support for mothers and families. On June 18, the assembly voted to extend paid maternity leave from four to six months. The new policy, which takes effect May 1, 2013, is a bold departure from other maternity leave policies in Southeast Asia.

Three days later, the National Assembly voted to expand the ban on the advertising of breast milk substitutes for infants from six to 24 months, including teats and bottles, and to ban advertising of other nutrition products and foods for children under six months. The decision aligns Vietnam's Advertisement Law more closely with the International Code of Marketing of Breast-milk Substitutes, and will help ensure that mothers and families receive more accurate and unbiased information about how to feed their children.

Both policies passed with more than 90 percent of the vote.

The success was the result of a large collaborative effort between the National Assembly, government agencies, UNICEF, WHO, Alive & Thrive, and local advocacy partners. Each partner either led or shared significant responsibility for specific activities—whether conducting research and establishing the evidence base, performing policy and legislative analysis, creating compelling communications materials, liaising with relevant partners or legislative agencies, or building consensus through workshops and seminars. Throughout the process, the media was engaged to tell the story of the impact of poor infant and young child feeding on health and development outcomes.

Infants are at greatest risk of diarrheal disease when foods other than breast milk are given. And when breastfeeding stops, infants lose the protection of breast milk's anti-infective properties. With policy changes like these, no Vietnamese mother will have to decide between her job and the health of her child.

Read more about how the policy changes came to pass at AliveandThrive.org.