Using data visualization to tell the full story about diarrhea 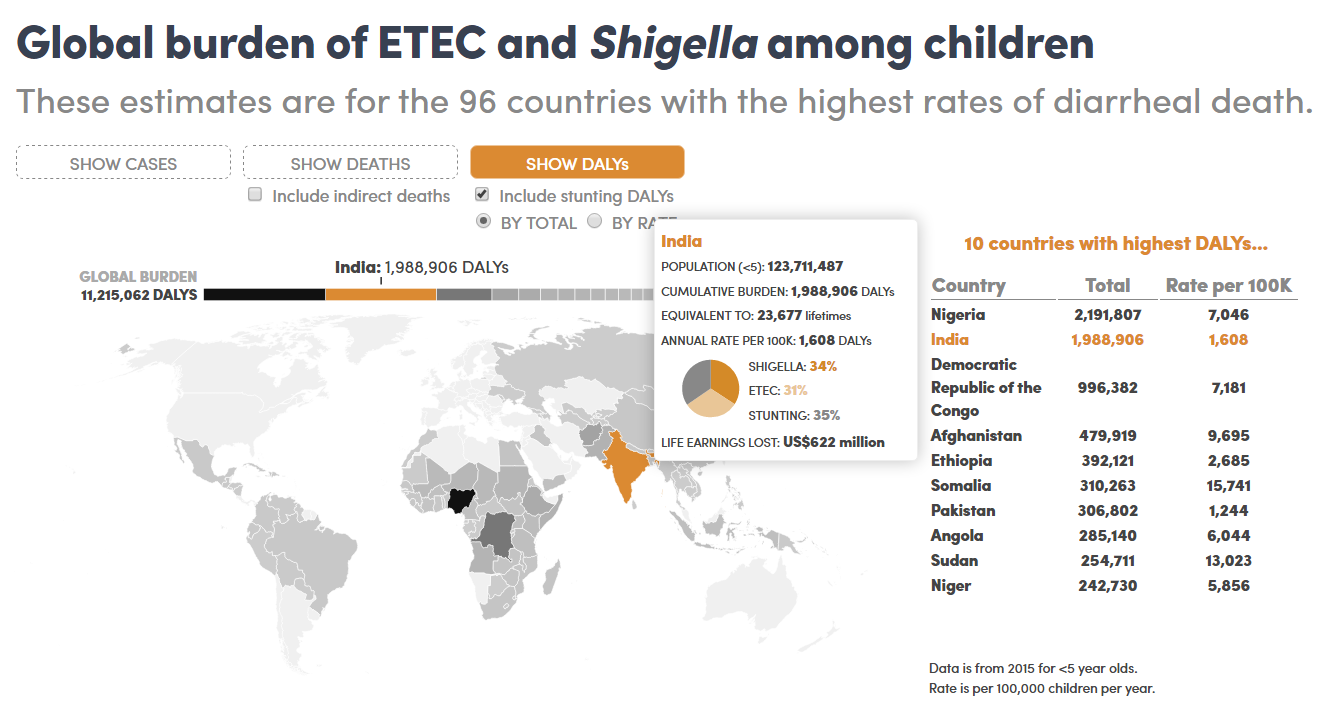 For non-technical viewers, data often lacks accessibility. But when data is broken down and refined through visualization, it can become a compelling storyteller and tool in evidence-based decision-making.

DefeatDD recently launched a data visualization tool to tell the full story behind the global burden of ETEC and Shigella diarrhea. The visualization uses a new set of disease burden estimates—including cases, deaths, and long-term consequences—that PATH's health economics team has been developing with Dr. Richard Rheingans and his team at the University of Florida. I sat down with Farzana Muhib, one of PATH's health economists who helped analyze the data, to get her take.

LE: So first of all, why were disease burden estimates for ETEC and Shigella needed?

LE: How did the University of Florida team generate the disease burden estimates?

LE: Why is the burden represented in disability-adjusted life-years (DALYs), rather than just deaths or cases? Why are DALYs important to understand?

FM: DALYs, which measure disease burden as the number of healthy years of life lost due to either illness, disability, or early death, are a great way to capture the burden of both deaths and cases as well as the disability due to long-term consequences of ETEC and Shigella diarrhea. DALYs are also important as a metric to compare the burden of different diseases to understand their relative burden to one another.

LE: How will the burden estimates be used in decision-making about ETEC and Shigella prevention and control going forward?

FM: These burden estimates are only the first step in trying to expand our understanding of ETEC and Shigella disease burden beyond the disease directly caused by the pathogens. They also tell you which countries may have a higher burden of disease, as well as identify those countries that do not have any or very little disease. The work on the spatial disparity of disease burden within countries is especially important as we need to understand if everyone in a country is at equal risk for disease. Both sets of information are important as we try next to understand where vaccines may be most impactful and cost-effective.

LE: What do you see as the role of data visualization in turning these estimates into action?

FM: Many people process information visually. By putting these estimates into graphics that can tell a story, we are enabling people to quickly understand disease burden—not just how much, but where. I think this is great tool to use for advocacy and awareness. Having this tool available will allow us to reach non-scientific audiences such as policymakers in order to convey how important ETEC and Shigella are as causes of diarrheal disease burden within their countries and globally.

Check out the new visualization here and visit PATH's Center for Vaccine Innovation Access website to learn more about the development of ETEC and Shigella vaccines.