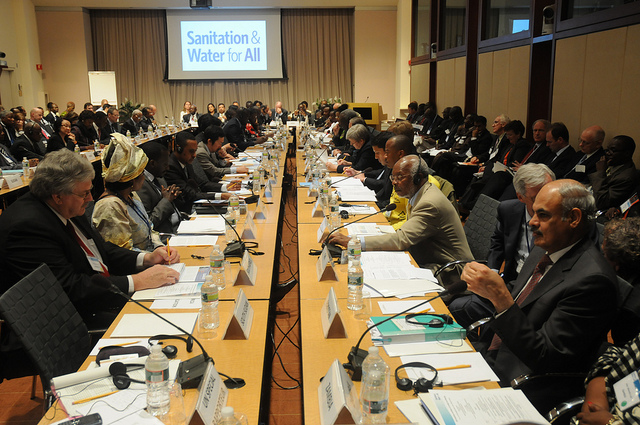 “A mother and child wait for you to return home” and put your commitments into action was the challenge from Liberian President Ellen Sirleaf Johnson to delegates at the Ministerial meeting of "Sanitation and Water for All" (SWA) on Friday. She couldn't be there in person but her words still carried the passion and authority she has for water and sanitation.

Friday, April 20th, was the 2nd Ministerial meeting of SWA, the global partnership that does what it says on the tin - working towards universal access for sanitation and water. Tearfund, alongside others, campaigned for the creation of this global partnership to increase the political and financial priority needed to deliver the basic right of access to water and sanitation for everyone. Since the partnership's launch in 2010 it has grown in size and strength. On Friday, an unprecedented amount of finance, water/sanitation, health and development Ministers met from nearly 40 countries to demonstrate how they are committed to change and pushing sanitation and water higher up the global as well as national agendas.

After much anticipation and advocacy it was a day to celebrate and I was able to hear first hand the commitments made.  Donor governments stepped up to the bar and the UK government led the way by announcing it is doubling the amount of people it intends to reach with access to water and sanitation from 30 to 60million people by 2015. Two new donor governments, the US and Australia, joined the partnership and called on other donors to do the same. The US also pledged $1 million to SWA's support to the most off-track countries.

A somewhat less "glitzy" announcement but equally important came from Japan. They committed to improve the targeting of their funding to the people most in need. This was in response to the findings of a new report highlighting how globally, only 50% of aid for WASH goes to the countries most in need and only 26% on basic services. Japan is the largest bilateral donor for WASH and yet the majority of their funding is spent on larger infrastructure projects. So, if Japan does really does make a step change, it could make a huge difference to the most poor and vulnerable.

-- The Kenyan Minister for Water and Irrigation, Charity Ngilu, reflected that “the missing link in Africa is lack of access to water” and responded pledging that a further 20 million people would gain access to drinking water and sanitation by 2015.

That's just a snippet of the commitments. However, as with all such endeavours, there is never time to sit back and celebrate for too long. There were also some sobering reminders of why everyone had gathered. The Minister for Rural Rehabilitation and Development from Afghanistan was open about their shockingly low levels of sanitation coverage at only 5% of the population. The room went tangibly quieter as Nigerian Finance Minister, Ngozi Okonjo-Iweala, shared her personal story of contracting hook worm from poor sanitation in villages as a young lady and receiving life saving treatment years later.

Underlining President Johnson's call at the beginning, ex Ghanian President and now Chair of SWA, John Kufour, reminded delegates, “We'll be judged by our actions and not our words”.  As civil society, we'll be working hard to ensure the commitments turn into action and the mother and child are no longer waiting.

-- Learn about other meeting highlights and join the conversation at #SWA4All on Twitter.