Thinking Big for Babies and Mothers with PATH’s Cyril Engmann 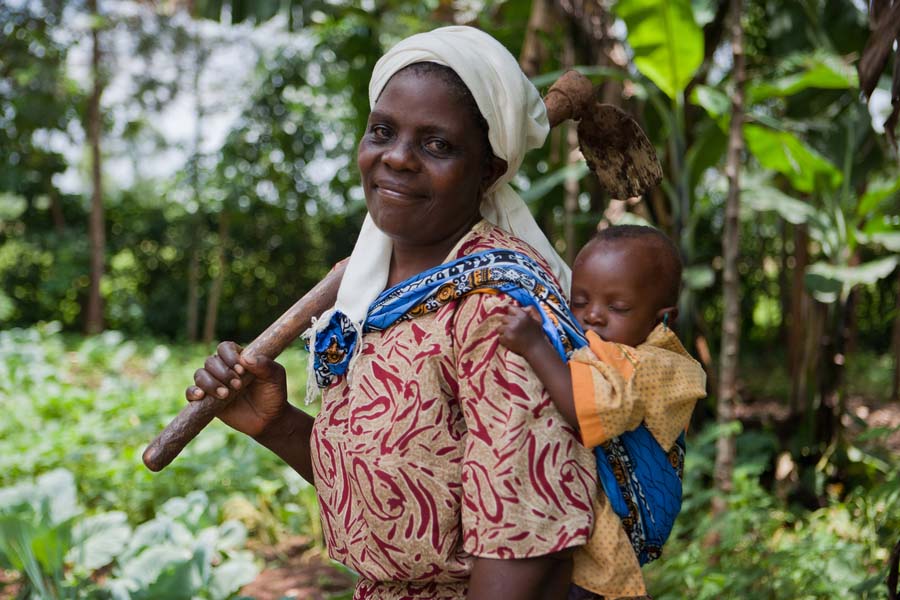 In 2014, PATH welcomed Dr. Cyril Engmann, a world renowned expert in newborn health and our new director of Maternal, Newborn, and Child Health and Nutrition (MNCHN). That sounds like a lot of disciplines to take on, but Dr. Engmann is used to playing many roles in global health--as a teacher, clinician, advocate, and leader. Between advocacy to US congressional staff and visits to witness PATH's MNCHN projects throughout Africa, Dr. Engmann took a few moments to chat with DefeatDD about his team's work, his vision for integration, and reflections on his newest role.

You've already traveled quite a bit to visit PATH programs. Where have you visited, and what did you see in action?

In Ghana, we have a large project called the Making Every Baby Count Initiative, or MEBCI, addressing the main causes of newborn death: prematurity, birth asphyxia, and sepsis. We're working in health facilities and hospitals with this project, and in community settings with a complementary USAID project called Systems for Health. We partner very closely with the Ghana Health Service throughout whether at strategic policy, program, training, or research level. I think MEBCI and our work in Ghana has the potential to make a major impact in the newborn space.

Ghana was one of the first countries to adopt the Essential Care for Every Baby (ECEB) module. These are fundamental interventions: ensuring warmth for newborns, clean cord care, breastfeeding in the first hour, recognizing breathing problems, and infection risks, among others. The answer is not always the high-tech solution: The simple practices and solutions often present the greatest opportunities for improving newborn health.

How does PATH's MNCHN Program integrate a focus on those first critical newborn weeks with further healthy development?

I saw this in action when I traveled to South Africa and Mozambique to visit our Windows of Opportunity project, a comprehensive focus on a child's first 1000 days. This is a critical time period that shapes long-term physical, cognitive, and emotional health. Early childhood development is the next frontier in MNCH. We've had a survival lens for the last 10-15 years, and necessarily so. But now we need to broaden to not just ensuring a child is surviving, but also thriving. PATH is carving a niche role leveraging the health system to mediate early childhood development, including focusing on the mother before, during, and after pregnancy; and integrating education and surveillance on developmental milestones and assessments of risk factors with routine clinic visits, etc.

It was terrific to see how excited the healthcare workers were to implement and then witness the benefits of early childhood development and the commitment of families, especially mothers, to this. We are helping clinicians and families anticipate a child's health needs and proactively recognize when early development milestones aren't being met. An ounce of prevention is always better than a pound of cure. Now they can intervene early, during the most critical period of time, to make a long-term impact.

This video highlights PATH's work in South Africa, where we are strengthening care in the first 1,000 days of life—from a mother's pregnancy to her child's second birthday—to ensure a healthy start and lifetime of possibility.

Teaching and empowering communities must be particularly resonant for you. In addition to a researcher, program leader, and clinician, you are also a teacher.

I am passionate about teaching and come from a long line of teachers. From probably the last 10 generations, back to the 1600s, I come from a family of people who have taught in one way, shape, or another. My father described himself as a teacher first and foremost. He was also a physician who worked with the group at Cambridge (the original Cambridge that is in the UK!)  in the 1950-60's who helped characterize Trisomy 21, what we now know as Downs syndrome. He was a professor of cytogenetics and anatomy, helped found three medical schools in Ghana, subsequently becoming Dean of one of them, had a television program, and wrote books on public health. Yet, he always thought of himself first and foremost as a teacher. And because I think particularly highly of him, I don't know that I'd necessarily call myself a teacher in that same league. But I love teaching and it's something that is in my DNA, and which I really enjoy. I have had the privilege of working with many rural remote communities in Africa, Central and South East Asia, and South America. Without a doubt, fully understanding the milieu in which one is working aids tremendously in developing programs and studies with a strong element of teaching. By contrast, in high-income hospital settings such as in the UK or US, whether it is teaching medical students, physicians training to be pediatricians, pediatricians training to be neonatologists, or teaching MPH and PhD students from the Schools of Public Health, teaching and mentoring are two things I really love doing.

What are some of your favorite things to teach?

Fundamentally I love to teach where there is some action to follow. I also love to teach people to think broadly. I'm not as interested in what the “right” answer is, because often there are many right answers. But has the logic been followed through? Have all the factors been considered? The process can influence the end result so much more.

Perhaps most of all, conveying complex concepts to non-clinical people, whether to families in low-income country community settings or in high-income country hospital settings, this is particularly rewarding especially where it leads to a desired improved health or other outcome. At PATH I have also had the opportunity to spend some time on Capitol Hill sharing evidence-based practices with Congressional folks. The questions and interchanges that occur are fascinating, usually starting gently about MNCHN -related issues and then rapidly moving onto broader things. One recent question was about the intersection of global health and world peace!

My orientation is very multi-sectoral and multidisciplinary in nature. I see the value in and love being able to share, to hear people's ideas, see people look at things with a different lens—and then put it all together and move on it. That's very special. I'm always learning that way. That's one of the things I'm excited about in this role, working with a talented MNCHN team to do a multiplicity of things across the research, policy, implementation science, and priming-to-scale continuum. And much of it is interdisciplinary, which really appeals to me. As a frontline health worker, I don't take care of a critically ill baby and not talk with his/her mother and father about contraception, nutrition, diarrhea, vaccinations, early childhood development. It's a very comprehensive package. I think of a neonatalogist as a family practitioner for these little babies, our little citizens. It's a wonderful subspecialty to have, a real privilege. One of the things that drew me to the position with PATH was this idea of integration.

The Every Newborn Action Plan is a great example of integration. Can you tell me about your work as an architect of that effort?

About three years ago when I led the newborn program at the Gates Foundation, I was struck by how many different people were digging neonatal wells in different parts of the world, so to speak.

I remember thinking we needed a grand vision, a concerted movement which could affect policy, programs, and research globally. And one had to think strategically about how to shape it such that countries would ultimately have ownership, there would be strong demand generation from civil society, great buy-in and ownership multisectorally, and accountability. I invited a small team to work with me and we pulled out all the stops! Now we have all 193 countries signatory to the UN who have ratified the Plan and committed to make themselves accountable at the WHA. We also really worked hard at making the Plan a multisectoral one, broader than solely on the newborn focus. We worked with various other communities -  utrition, maternal health, child health, civil society, the private and public sector, academic institutions, NGO's and governments, among others. In fact, it was originally called the Every Newborn Action Plan, but now it's called Every Mother, Every Newborn.

Frankly I had seen so many glossy global action plans gathering dust in Geneva and I was terrorized by the idea of pushing for this global movement which would end up in similar fashion. I think our final ENAP product has a lot of tangible promise and the effort has momentum. I'm very passionate about trying to see it through.

In talking about the Every Mother, Every Newborn Plan as a very practical resource for countries, it reminds me of the Global Action Plan for Pneumonia and Diarrhea (GAPP-D). Now that we have both of these plans in hand and in practice, do you see an opportunity for further integration?

I'm a firm believer in the power of thinking big “with the lid off” so to speak. I believe that if one does not have a vision, a sense of how one can make things work, and then a means to measure that effort, it definitely won't happen. I think we should integrate further; it's almost irresponsible of us not to.

A lot of people might say that is blue-sky thinking. But how much would the sum of the parts be, how audaciously huge, if we could harness more efforts? To paraphrase Nelson Mandela: “Everything seems impossible until you do it.” With the Every Newborn Plan, some people thought that was too blue-sky, and now it's come to pass. There have been mothers who have looked at their children who are critically ill, even with doctors saying they are going to die, and some of them have kept that blue-sky approach and their children have lived.

Is broader integration blue-sky? Maybe. Is it impossible? I'd say not.

While keeping this comprehensive perspective, what's next for PATH's work in MNCHN?

It is an exciting time for the fields of maternal, newborn, child health and nutrition. Within each of these areas, there are a multitude of programs, policy work and, research that MNCHN is involved in. Externally I'd like us to deepen our relationships with donors such as DfID, CIFF, UNICEF, USAID, WHO, BMGF among others. Internally, within PATH, we are broadening our involvement to include issues such as vaccines, maternal immunizations, family planning, WASH, among others, deficiencies of which are significantly associated with adverse survival outcomes for mothers and their children, the very populations that PATH focuses on.

As we reflect on our past successes, it is important we document how we were successful and what we learned from each experience or project - the implementation science of what we do. Doing this well will allow PATH to lead the field in how to get things done well, including shaping policies and programs that can advance and bring greater impact. PATH's role in building these partnerships is an important one: We are not just a stakeholder, but a leader in coordinating and harmonizing efforts in maternal and newborn health.

Mother's Day is right around the corner. We've talked a lot about babies, but tell me why a focus on mothers is also pivotal for global health and development.

We all appreciate the incredible role that mothers play. Without them, the data suggest mortality rates increase significantly in their children. Mothers are children's best advocates, and being able to empower, educate, and equip mothers, (and fathers) to be able to advocate confidently for their children is very powerful.