There's a vaccine for that Skip to main content

There's a vaccine for that 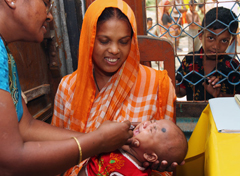 Reposted with permission of PATH

In 2003, vaccines against rotavirus were poised to reach the global market, but surprisingly few people knew the virus' name, let alone that it was the leading cause of severe diarrheal disease. “We've never heard of it,” ministers of health would say when PATH staff members like Evan Simpson began meeting with them to spread the word about the virus and new vaccines against it.

Evan spoke about the early days of the Rotavirus Vaccine Program recently as part of our Power of Vaccines special feature, which showcases the broad range of PATH's work in vaccines—including generating demand for new ones. You can see Evan's full interview there.

Evan and his colleagues didn't focus solely on vaccine. They offered an integrated approach to diarrheal disease control. As country leaders reviewed new data about the effect of rotavirus and the cost-effectiveness of vaccination, their interest grew, Evan recalled:

“When the Rotavirus Vaccine Program started, one of my responsibilities was to go to countries that we thought might be early adopters of vaccine and talk with ministries of health about rotavirus,” he says. “They would often be sort of puzzled because most of them had never heard of rotavirus. They would either say it must not be a problem in our country because we've never heard of it. Or they would say, well, it sounds interesting but our bigger problem is diarrheal disease.”

An integrated approach to diarrhea

“We developed this concept of presenting the broad portfolio of new interventions for diarrhea control. That portfolio included rotavirus vaccine. It included zinc treatment and a new formulation of oral rehydration solution. We would include information or data about the importance of exclusive breastfeeding, vitamin A, and also some of the environmental issues, such as water, sanitation, and hygiene.

“We would say to the countries, here's the broad portfolio of interventions for diarrheal disease. Let's work together to develop a national strategy that lays all of these out. Because there is no one vaccine, no one treatment, that's going to solve the problem.”

-- See the rest of Evan's interview.

-- Video: Follow the trail of rotavirus vaccines as they demonstrate dramatic impact in Nicaragua.