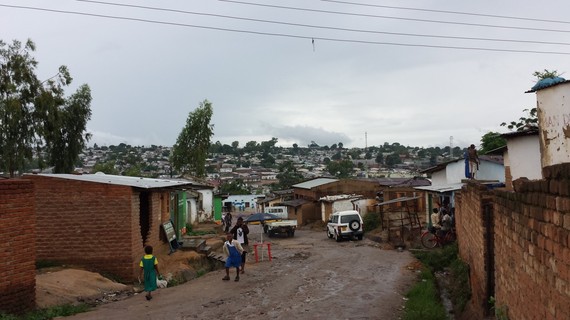 When you survey the low income area of Ndirande, Blantyre in Malawi from the crest of a hill you notice the density of the homes mashed together, the uneven, almost crater-like nature of the unpaved roads, and the sites and the sounds of a town. What you can't notice from this perch is that this area, informally planned, has no sewer network, so people make do, doing their business mostly in basic pit latrines.

Until recently, when those pits became full, there were few solutions. Families with full pits resorted to sharing toilets with their neighbors or emptying their pit into a nearby ditch, creating a public health risk.

In 2010, Water For People set out to support small scale entrepreneurs to be in a position to solve this problem for customers in Blantyre. One of these was a man named Matthias John. Initially Matthias was not alone. Water For People identified 12 potential pit emptying business people, but one by one they found the business to be too hard and not for them. They even ridiculed Matthias and tried to get him to leave the business, but he persevered and now he grins as he says, "Those same people that teased me, come asking for a job."

But building up the business has not been easy, and Matthias' story points to the difficulty faced by sanitation entrepreneurs and why they are in need of ongoing and specialized support over time to succeed. In the early days of the business, Matthias struggled to find customers, didn't keep good accounts, didn't have the support of the City Council; he even lost some friends.

What he and Water For People tried out was something new and risky. Equipped with a revitalized technology called the Gulper (a hand-powered bilge-pump-like sludge-sucking device) he could enter the areas of town unreachable by cesspool trucks and relieve customer of their sludge, carrying it away in drums to the city dumping site. Initially there was resistance by the City Council but they soon realized with Water For People's advocacy that this was -- while still imperfect -- a much better solution than what existed.

All through this Matthias kept his dream alive to make his business successful and have a better life for his family. "This sanitation business has really moved my life," he says. Now he believes his services are known to about 50 percent of his target market. He has opened an office and a bank account; he has three employees; and his wife Ruth helps him with the bookkeeping. His customer base has grown and he has repeat customers. Whereas previously he had struggled to pay for rent and food, now with his earnings Matthias has bought a plot of land where he has started construction on a house. He is also sending his oldest girl to preschool and envisions his three girls and boy all receiving a good education.

But he is not resting on his success. "Where I have come from is nothing, where I am going is huge," he predicts. He even gets calls for his services from Lilongwe, the neighboring city four hours away. Water For People's market analysis identified a large untapped market for Matthias to serve, as roughly half a million people in Blantyre need manual pit emptying services. This translates into about $4.2 million worth of business. His goal in 2014 is to double his number of customers and start to diversify his business into latrine construction and toilet upgrading services. He believes he has an edge up on his competition (in the past 18 months other pit emptying businesses have started), because he has several years of experience in the business and his customers recognize his better quality, and more honest, service.

But there are still challenges. The dumping fee is still very high and transport costs eat into his margins. Ideally he wants to own a one-ton pickup truck, but finding financing for an entrepreneur of Matthias' size is next to impossible. There is also a need for a better and cleaner pit emptying device.

Water For People continues to address these challenges, creating linkages to government, private sector, and finance partners, and encouraging other actors to look more seriously at the sanitation space. There are promising, cleaner and more efficient pit emptying technologies being developed by Water For People in Uganda, which will also be tested in the coming year in Malawi. This will hopefully support Matthias to further grow his business reach. Another one of Water For People's partners in Malawi, the private company called Tools for Enterprise and Education Consultants (TEECs) has recently registered as an MFI in Malawi and begun to give out sanitation loans. Water For People is supporting TEECs and linking with other finance partners to try to solve some of the finance challenges that exist for sanitation businesses and households looking for sanitation financial products.

The Sanitation business will never be easy, but with the right encouragement and assistance, a Matthias can emerge. Now when you look from that same hill, you'll see a new sight, Matthias standing in front of his shop smiling.