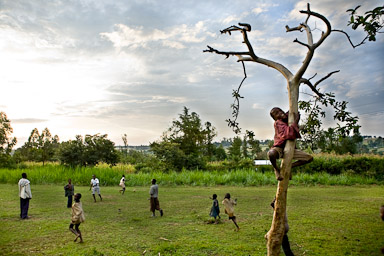 In 2008, PATH was thrilled to welcome Dr. Duncan Steele as our senior advisor on diarrheal disease. For three decades, he has tracked rotavirus in Africa and is recognized worldwide as a leading expert. A recent outbreak, potentially due to rotavirus, hit particularly close to home, and we sat down with Duncan for a personal and professional perspective.

Describe the years you spent in Kwe Kwe.

I grew up in Zimbabwe, where we moved from town to town as my mom and dad - both civil servants -were transferred within the country. I ended up living in quite a number of small towns, including Kwe Kwe in central Zimbabwe, where my mother moved while I was at studying at university in Cape Town. I would hitchhike home 2 or 3 times a year back to Kwe Kwe - the first time to a house that I had never been to and needed to  stop in town and ask for directions!

Kwe Kwe was a small town (probably about 50,000 people all told), centered on industry—there was a major steelwork plant and mines just outside town, with a small farming community around Kwe Kwe. There was essentially one main road through town, which was the main road from Harare in the northeast to Bulawayo in the southwest. Kwe Kwe had one traffic light and a couple of traffic roundabouts. In many ways it was an idyllic place to grow up, with warm balmy summers and mild winters—a very out of doors upbringing. We lived in a large fully, veranda-ed house in Fitchlea suburb with a big garden, huge trees, and wonderful avocado trees.

There was one small, basic government hospital, which I or my siblings fortunately never had reason to visit; and a single, de-commissioned veterinary surgeon, whom my mother regularly took our menagerie of dogs and cats to, despite his lack of a license! We had access to normal amenities including clean water and sanitation, although I do remember going swimming in the Kwe Kwe Dam many weekends when I visiting home and picking up bilharzia (schistosomiasis) several times, which irritated my mother no end, and bewildered the doctors back in Cape Town, where there is no schistosomiasis!

Have you been back to visit? What has changed?

I was last back in 2004, on a weekend off from a WHO meeting in Harare. My mother no longer lived there, so I didn't have reason to visit Kwe Kwe specifically, but the main cross-country highway passed through on my way to Gweru, where I still have some old school friends.

Unfortunately, I think due to the economic crisis in Zimbabwe, Kwe Kwe hadn't undergone any development at all, even 30 years later. Infrastructure had not evolved, mirroring what we've seen in Harare and other places in Zimbabwe, where 2008 brought a terrible cholera outbreak, made worse by a collapse in health and sanitation infrastructure and lack of access to clean water.

Is there a typical rotavirus season in Kwe Kwe?

Zimbabwe's rotavirus season occurs in the late autumn to winter months, March through June or July. So it is reasonable to think the current outbreak may be due to rotavirus. It is also affecting very young children, the typical victims of severe rotavirus.

How would rotavirus vaccines benefit children and families of Kwe Kwe?

Ministry officials also indicate that they are concerned about immunization coverage and especially so in rural areas, but they are still determined to have access to the new rotavirus and pneumococcal vaccines.

How exciting would it be to see these vaccines all the way through, from identification of rotavirus in Africa through conceptualization of a vaccine to introduction in Zimbabwe?

It really would be very special. When I was a graduate student at the Medical University of Southern Africa (Medunsa), 30 years ago now, my professor asked me, “What do you want to work on?” I told her I wanted to work on something of local importance. At the time, rotavirus was relatively new and unknown in African populations, but we know diarrhea was important—if not glamorous . For the first two years I went around the local hospital at Medunsa collecting stool samples from babies with diarrhoea!

Africa is where my heart is. But it's also where the greatest burden is. Of the 13 countries worldwide with the worst rates of rotavirus deaths in very young children, 12 are in Africa. Although there are now vaccines that are being used elsewhere, I still feel a sense of urgency for Africa. But I'm also starting to feel a sense that we've finally gotten there.

-- What is rotavirus? Learn the basics with the briefing paper, Common Virus and Senseless Killer

-- Read about PATH's work in Armenia to explain the potential of rotavirus vaccines to decision-makers.