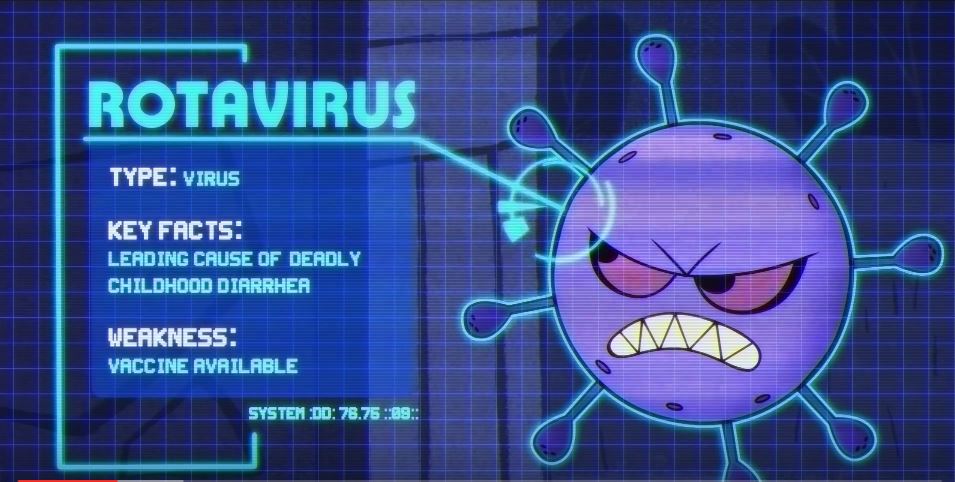 The DefeatDD team took a few liberties with this rendering of rotavirus. Watch our DefeatDD superheroes in action against this vicious villain.

Fully understanding rotavirus—the tiny, wheel-shaped virus that is the leading cause of severe childhood diarrhea—means understanding how it interacts with other dynamic elements in the body. Rotavirus survives or perishes in a landscape dominated by human immune cells, and this is important information for medical virologist, Dr. Khuzwayo Jere. It means he must make a disciplinary trek into immunological territory.

The reason? The current rotavirus vaccine being used in Malawi, ROTARIX®, is only about 50% effective. He wants to understand if the antibodies produced after vaccination work against the rotavirus strains circulating in Malawi.

To be effective, a vaccine must trigger the immune system’s B-cells to recognize and respond to future viral invaders. Rotavirus infects by entering cells in the gut, multiplying, and causing illness. The B-cells, triggered by the vaccine, counter this by latching onto rotavirus’s outer layer, or capsid, with their B-cell receptors, disabling the virus’s ability to take over any additional cells. Latching activates the B-cell to divide into daughter cells that produce antibodies – free-floating replicas of the receptor that tag the virus and block its entry into cells. However, the fit of B-cell receptors (and their corresponding antibodies) to their viral targets is specific to the strain of virus – like a lock and key. A better fit means a more effective response.

What troubles vaccine researchers is that antibody responses to rotavirus are highly diverse. Human genes that make B-cells vary within populations, and so, too, might antibody responses to a given rotavirus strain, of which over 70 have been identified in human infection. Rotarix® contains only one viral strain. How well an immune response against that one strain works against other strains remains unknown.

To better understand how well Rotarix® acts against viral strains not contained in the vaccine, researchers need a snapshot of the antibodies produced after vaccination. Protein or peptide microarrays, which can identify the presence of certain antibodies, might provide this snapshot, but they only detect the antibodies represented in the microarray. Since little is known about the highly diverse antibody responses to rotavirus infection, it is difficult to design a microarray sensitive to all of the possible responses.

Instead, researchers like Dr. Jere are taking a more direct approach: isolating the B-cell variants involved in immune response to vaccination—the creators of the antibodies—and cloning their B-cell receptors.

Dr. Jere has designed an experiment that will use cell sorting on blood samples of recently vaccinated Malawian children to ‘pull aside’ B-cells responding to viral targets. Next, he will analyze the genes of the B-cell receptors to get the genetic code of antibodies triggered by rotavirus vaccination in this population.

Dr. Jere and his team will apply this genetic code to make cloned copies of vaccination-induced antibodies without the need for B-cells. Using synthetic nucleotides, he plans to construct genes corresponding to the sequence data and then insert the genes into the nuclei of laboratory-grown cells. These cells will churn out new, artificial copies of vaccination-induced antibodies.

Finally, to test how well these antibodies work against rotavirus circulating in the community, the team will apply the cloned antibodies to laboratory-grown rotavirus strains obtained from stool samples of real patients in Malawi.

The motivation behind this cell sorting, coding, and cloning? Saving lives and defeating diarrhea. Dr. Jere believes this experiment will reveal why Rotarix® is only moderately effective in Malawi, and he is hopeful it will uncover ways to improve the performance of the next generation of rotavirus vaccines in the areas where they will have the most benefit.

Dr. Peterson is an epidemiologist and science enthusiast who interviewed Dr. Jere for this blog. For more information on Dr. Jere’s work, please contact him at kjere@mlw.mw. 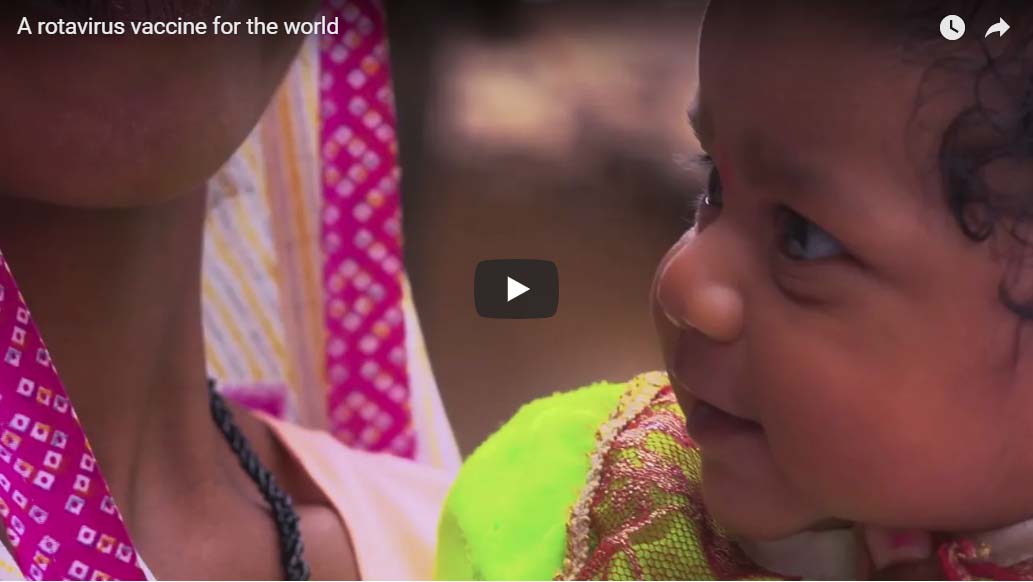 A rotavirus vaccine for the world
Rotavirus is the leading cause of severe and fatal childhood diarrhea around the world.