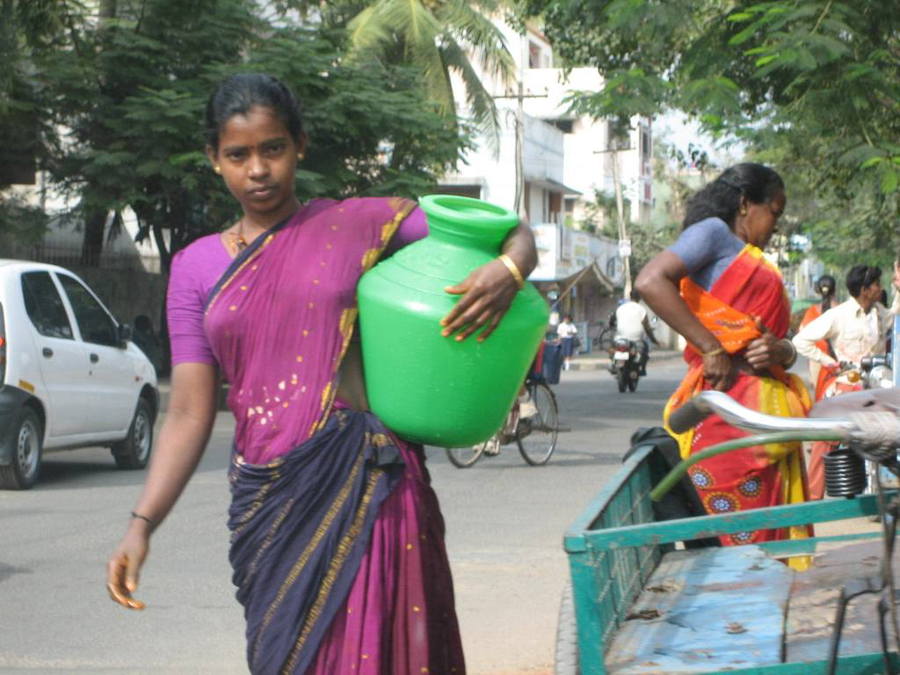 This study was funded by the National Science Foundation. Blogs featuring this study have appeared on the Center for Disease Dynamics and Economic Policy's website. Ali Akram conducted this work independently and the following does not reflect the views/opinions of Evidence Action. Photo credit: PATH/Glenn Austin.

Despite the availability of inexpensive and easy-to-use technologies and simple behaviors that can prevent diarrhea, it was an unpleasant surprise for me to learn that it kills more than half a million children a year, predominantly in the developing world. More troubling still, social scientists have found it challenging to get high adoption rates and maintain participation amongst poor households, even when the technology is provided free. This got me curious: why is this the case?

What I Did: The Experiment

In a randomized controlled trial in Karachi, Pakistan, I test the hypothesis that perhaps families need tools that clearly demonstrate the impact of health interventions - in this case, chlorine tablets for water purification.

I provided households with a simple visual tool (called Info-Tool) to help them assess the efficacy of using tablets. Info-Tool allowed households to record incidences of diarrhea using simple bar charts. Additionally, at the end of each month, I provided them a bar chart of the normal rates of diarrhea they could expect for that month. Diarrhea varies with season, so the norm I provided was a moving monthly reference (related to the number of children under five in the household) and Info-Tool allowed households to visually compare their bar charts to the reference level.

Figure 2
Form of the experiment: control group in blue and treatment in green.

What I Found: Remarkable Results

Two results really struck me. First, my data show that as we enter the subsequent summer season (near the 46 week mark), both groups demonstrated higher tablet acceptance. Significantly, the treatment group's summer increase in uptake was higher than the control group. To me, this suggests an impact of Info-Tool on households' fundamental understanding of disease seasonality i.e. households seemingly better understood the “dynamics” of diarrhea.

A more striking result to me, however, was the fact that children in treatment households tended to measure significantly better than control households on health outcomes such as weight (22% gain), height (6% gain), and mid-upper arm circumference (3.5% gain). This suggests that the use of tablets had real measurable health impacts.

The results suggest that allowing households to track and reference their disease prevalence increased their ability to detect the efficacy of chlorine tablets, thus making the intervention far more successful. More specifically, I believe that households were able to better learn about the effectiveness of tablets because Info-Tool provided a more precise signal about tablet effectiveness. It is also apparent that households possess a general sense of the seasonality of the problem but with the augmented learning from the Info-Tool, treatment households show a higher likelihood to accept offered tablets as the “danger” (summer) season started.

I believe this study points the way forward in two important ways. First, it demonstrates a powerful new way to address a major global health challenge i.e. under-five diarrhea with its associated health costs. I found that the intervention had strong and persistent effects a year after it began, inducing people to adopt chlorine tablets when they otherwise would not have.

Second, it confirmed to me that people can and do make beneficial health decisions - we've just got to help them “see” that those decisions have real benefits. Giving people clearer signals on how they benefit from their use of supposedly beneficial technology sparks greater participation. Moreover, I can imagine analogues to this technique being applied to other domains where health technology adoption is critical such as adoption of anti-malarial bed-nets and drug regimens for diseases like TB and HIV.