Our Ode to Evan Simpson, or The Adventures of an Integration Advocate Skip to main content

Our Ode to Evan Simpson, or The Adventures of an Integration Advocate 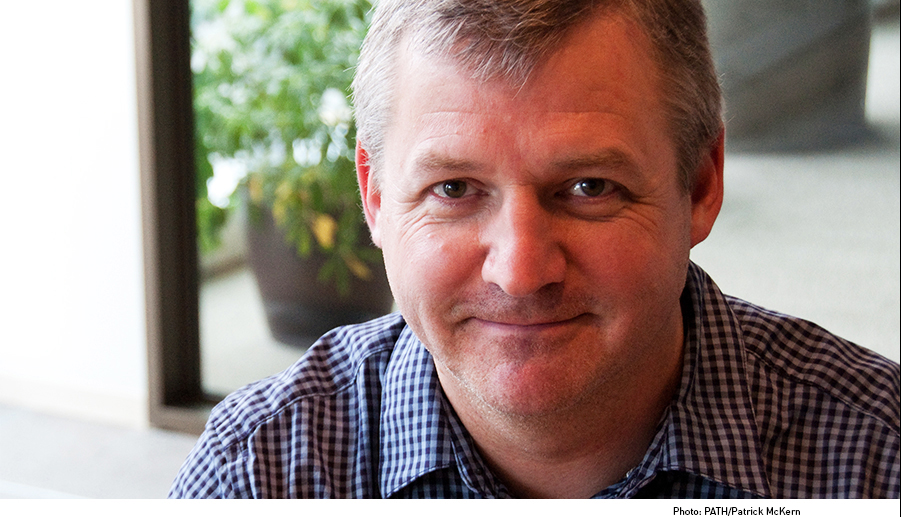 Last month, PATH bid a fond farewell to an irreplaceable colleague—one who just so happened to be the architect of the integrated approach that DefeatDD champions today. Evan Simpson is an optimistic advocate, a consummate collaborator—and an undercover comedian to boot! That potty humor you know us for? Evan is the inaugural inspiration. 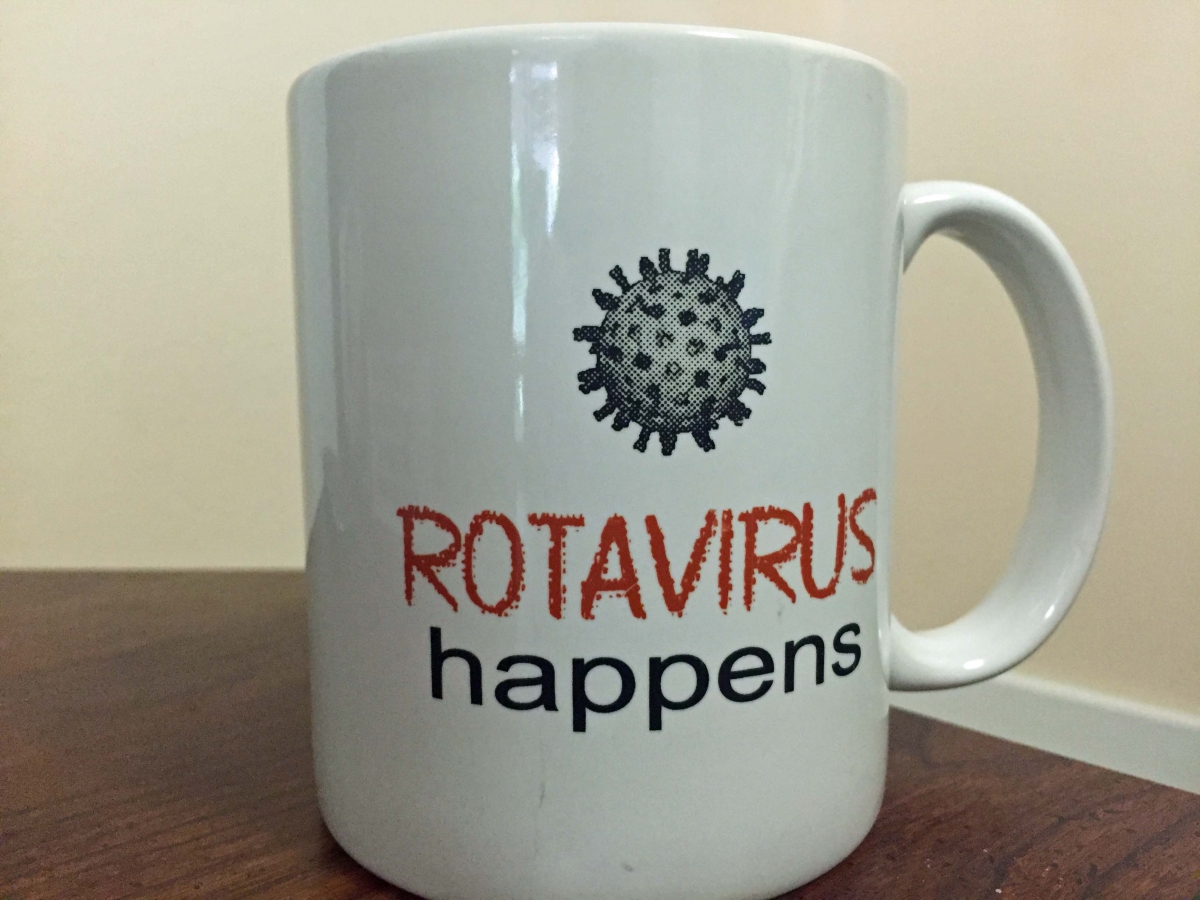 Thirsty? This mug is legendary at PATH and a testament to Evan's unique combination of wisdom and wit.

Evan is also now president of VillageReach, a Seattle-based NGO that ambitiously and effectively trains its focus on the hardest to reach communities. Before we could let him go, DefeatDD raised a glass to this globetrotter and asked for his reflections on the early days of integration, the next frontiers for children's health, and the relationships at the heart of impact.

Describe the moment you realized that diarrhea is your life's passion.

No, seriously - It was in Malawi, with WHO and CDC. We'd been invited to give a presentation to the ministry about rotavirus vaccines. This was around 2007, when we were trying to identify who would be the early adopter countries.

It was the same everywhere else: Kenya, Zambia, Ghana, Cambodia, El Salvador, Nicaragua. No one had heard of rotavirus. Nobody. And I remember thinking, one day the world is going to look up from rotavirus and say, wow, we need to do something about diarrhea. Everyone was very siloed: vaccines, WASH, nutrition, ORS. Even though we all had the same objective, nobody was talking to each other. I realized that, if we wanted to talk about rotavirus vaccines, we had to frame this in the context of an integrated approach that included all the tools that we know work to prevent and treat diarrhea. Integration could have much more impact than a single intervention.

I remember a stakeholder meeting in Nicaragua to talk about rotavirus vaccine introduction. And it was the community health workers, who specialized in nutrition but also knew about a seasonal diarrhea that came around every spring. So it was the nutrition workers who were the ones most supportive of a rotavirus vaccine, and it was representative of the broad spectrum of people who are touching this issue. At the patient care level, there's no silo. A kid comes in for diarrhea and no one may know what the pathogens are but they know what you have to do to treat it and prevent it from striking again.

It sounds like, when it comes to really making these advances, that it comes down to particular people or particular relationships.

If there's one thing I've learned in the past 15 years, it's that this is all about relationships. It's about finding the people who can get things done, those “key stakeholders,” and getting them motivated. If you don't have a relationship with, if you're not talking to the right people on the ground, nothing sustainable happens. In Kenya, they were reluctant on the rotavirus vaccine early on but they wanted to re-establish ORT corners. We knew a champion for it in the country, and it was that relationship that really made those take off.

So now 80+ countries have introduced rotavirus vaccines, many in Africa and many through integrated programming. If you talked to ministers and champions today, how would the conversation shift? What are the priorities that countries now should be thinking about?

The broader clean water and nutrition discussion has to amplify. This is interesting to me about what VillageReach does, focusing on that persistent 20% of kids who don't get vaccinated, live in squalor, don't have clean water. They are stunted, and their mothers don't have access to any health care. For those kids, clean water is the critical next step. For kids who ingest dirty water, it's not just about diarrhea, it's about stunting, malnutrition, many other things that affect their ability to thrive.

If I had stayed fumbling around with the diarrhea work—

“Fumbling around with diarrhea!” I think you just titled this blog.

Right! Fumbling around with diarrhea… or in it ….

But no, I really would like to have gotten into work on the gut biome. We've got to figure out what's going on in the guts of these kids. The role of gut health in stunting is a huge public health issue in India, for example. On my last assignment with PATH, I was in India for several months, and I saw the effects all around me. Children seemed really lethargic, really small, listless. They didn't have the energy that kids should have. What I think is an 8 year old is a 14 year old. It's overwhelming. And it's not just India, it's in Bangladesh, Nepal; in Africa. I think that's the next frontier, the nutrition and the water environment these people are living in that is contributing to their condition.

Even if you have the most nutritious food, if your body is fighting infection, it can't absorb the nutrients properly. And once it starts this cascading effect, you're in big trouble.

Yes. And it goes on for generations. You could see those same effects in these children's mothers, too.

Happier thoughts: What was your favorite trip to the field, or favorite moment on a trip for PATH?

I remember one trip to a village in Cambodia. The rainy season had just passed, and they had lost half a dozen kids to diarrhea. The grief still showed in the psyche of the community. These villages are far-flung, mostly 10-20 rice-farming families on 100 acres. I remember sitting with a community health worker as we were delivering zinc, ORS, and vitamin A; going through the flipbooks to teach the community. They were so appreciative of the district health official who was with us; satisfied that their government was doing something long-term for them, in response to the tragedy they had just suffered, losing so many children. I felt like this is what we're supposed to do. It wasn't just PATH doing great work and then we'd go away. They built something. The government now procures zinc and ORS and Vitamin A and routinely delivers it to villages. It's policy, and it's working. PATH is not involved anymore, and that is what it's about.

In Duan Tom village in Cambodia, a village health volunteer builds awareness of diarrhea and pneumonia among mothers. PATH piloted the integrated approach to caregiving here, and the Government of Cambodia ultimately implemented it nationwide.

We know the diarrheal disease work that you've done. But you've also done a lot of other things at PATH. Can you give us a rundown of all of the things you've done here?

Haven't worked in the mail room, and I haven't been CFO—both of which are good things. Nobody wants me doing math.

I was the first communications director for PATH, and then I moved to the Rotavirus Vaccine Program, traveling with CDC and WHO to identify and work with the early adopter countries. The diarrhea work started to grow and expand to champion an integrated approach. Later, I started to work with researchers on a new ORS solution, with clinical studies in Bangladesh. It ultimately wasn't the game-changer we thought it would be, but I learned a lot. It was really interesting and inspiring.

Then I became interested in how PATH could better connect with our country offices to achieve greater impact. And in mid-2015, we had a need in the India country office and I was able to step in and work as the interim country director. I knew a lot of the team there, and it's a really interesting place. That worked out to be a really fitting final post.

Given that you had this initial vision of the integrated approach, and where we've come now, what is your perception the advocacy movement around diarrhea?

Diarrhea was the big issue in the 90s and it fell off the map with a focus on HIV and malaria. The data are really clear: Without that awareness and attention, countries started backsliding. We felt like, diarrhea needs to get back on the radar. We may not have all the solutions yet but we have to start talking about it again. And that's what we've done.