In Mumbai, the spectre of diarrhea looms large 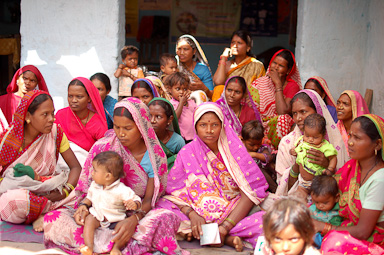 Five years ago, when Mitesh Gupta was born in Badohi (Uttar Pradesh), his mother Malti says, he was just fine. Five months down, the boy began to have severe episodes of diarrhea. Seeing no respite in the boy's condition, she opted to bring him to Mumbai, where her husband was working. The mother of four still recalls vividly her struggle. Today as Mitesh plays in the congested lanes around his 10 X 10 feet house in, Zakir Hussain Colony in Mumbai, where he lives with his parents and three other siblings, Malti knows that he has been lucky.

Malti may not have the global statistics in hand, but diarrhea remains the second leading cause of death in children - 800,000 under the age of 5 globally. Rotavirus is the most severe and fatal cause of diarrhea and it claims around 450,000 children globally and more than 20 per cent of those who succumb to rotavirus worldwide are children in India.

In the same area, Zarina is troubled by her daughter Shabana's episodes of diarrhea.  The mother of three says, “Shabana has been having this problem ever since she was six. We have got a sonography done. Every time she has an episode, there is a visit to the doctor which costs us anything between Rs 500 ($9) and Rs 1,000 ($18).” For Zarina whose husband works as a small time tailor in Zakir Nagar, the diarrhea episodes are something that she is beginning to live with.

This settlement on the fringes of the Deonar garbage dump in Mumbai is a maze of narrow lanes with drinking water pipes crossing through, making it tricky to negotiate. In most places, the pipes run through the open gutters. Mitesh and Shabana's families are but a reflection of many others, who live in these crowded and almost always dark alleys where the specter of a diarrhea outbreak looms large.

According to Dr. Asish Malekar, program manager, technical for the Strengthening Immunization in Mumbai Slums (SIMS), “In places where the drinking water pipes have rusted, there is a chance for contamination. Also since the water supply is intermittent, the empty pipes tend to pull in the water from the gutters. In the lower lying areas water tends to accumulate and during the warm seasons there are flies as there is garbage all over the place.”

Given the population in such health posts were a challenge to reach out to and children were missing their vaccination, over the past 18 months, the SIMS project aimed at the timely completion of antigen wise vaccination in all 0-2 year old children and pregnant women residing in five health posts in the project areas. The project developed a vaccination registry and its use for automated customized Short Text Messaging (SMS) services as mode of reminding and motivating respective families to get timely vaccination. The SMS is currently being sent out in Hindi and each SMS is directed to the family reminding them exactly which vaccination that particular beneficiary is due for. Typically the SMS will ‘speak' to the family urging them “‘on 24/10/2012, Krishna has to be given her MMR, DPT B,and Polio B. Go immediately to your nearest health post and get the vaccination done.”

The baseline survey carried out prior to the pilot project revealed that only 34.3 per cent children were vaccinated in the four urban health posts. Today that figure stands at 59 per cent. The most striking impact of the SIMS project has been in Appapada, where the percentage of fully immunized children shot up from 12 per cent to 60 per cent.

The improvement in immunization coverage will provide a strong foundation for rapid update of rotavirus vaccines when they through the public health system.

-- In India, PATH's Sure Start program has reached 25 million people, leading to substantial increases in safe practices for pregnancy and infant care.

-- Rota-what? Learn more about rotavirus, the most deadly form of severe diarrhea.