The missing link in Kenyan counties: Civil society advocacy for stronger funding and policies for women’s and children’s health Skip to main content

The missing link in Kenyan counties: Civil society advocacy for stronger funding and policies for women’s and children’s health 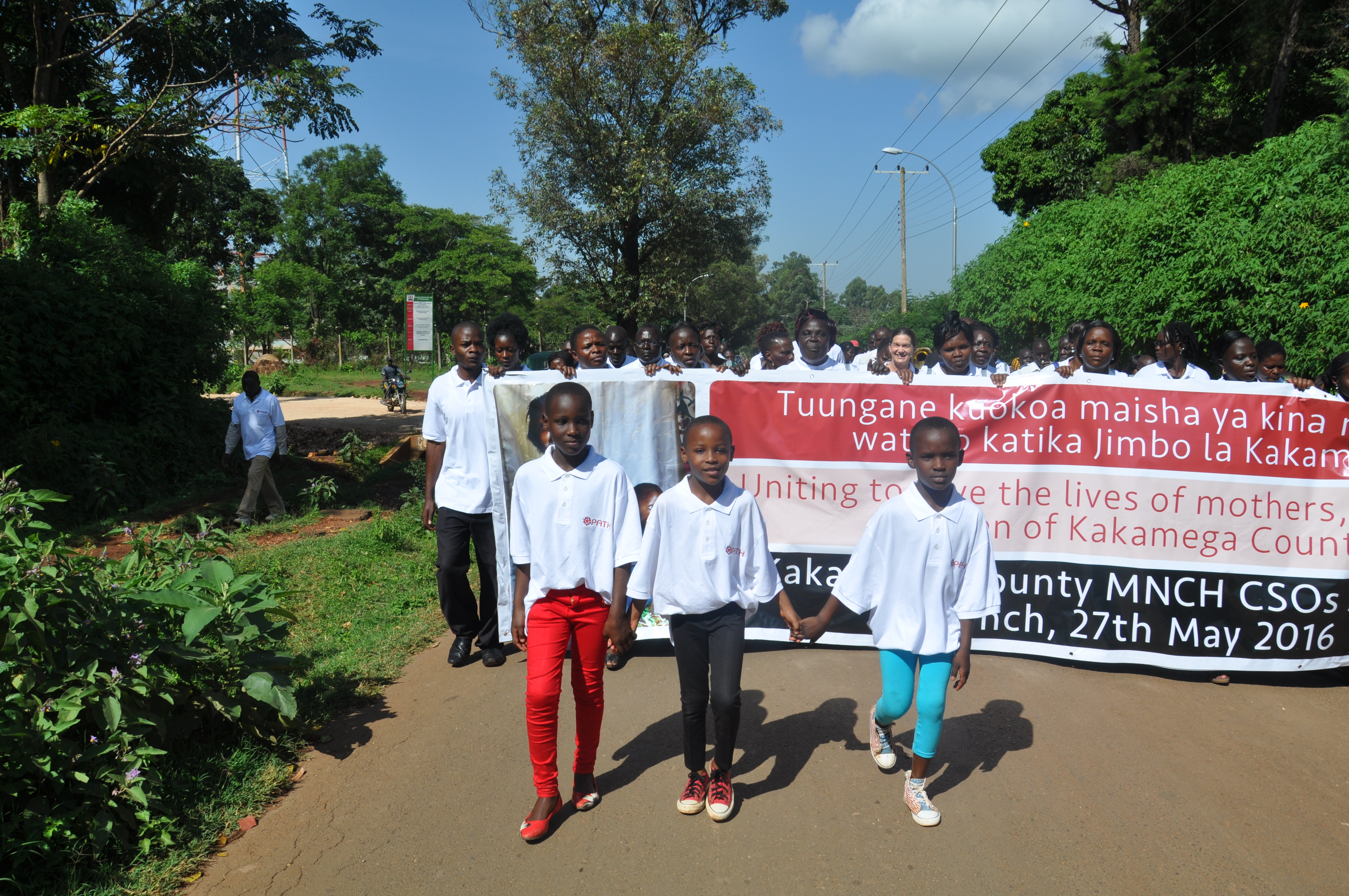 Children join the procession during the launch of the MNCH Advocacy Alliance in Kakamega, Kenya.

After a while, the preventable deaths became too much to bear.

For many years I worked as a midwife at different hospitals, and most days on the job were rewarding. I got to know many amazing women and provide them with compassionate care during their pregnancy, labor, childbirth, and postnatal period. Most importantly, I was able to support them in nurturing and safely bringing new life into this world. This was very satisfying.

However, it didn't always happen this way. Every so often, I would lose a woman or her baby during pregnancy, childbirth, or a few days after delivery due to entirely preventable causes. For example, sometimes, lifesaving supplies and medicines were out of stock—like resuscitation devices to help newborns with difficulty breathing, or oxytocin to prevent and treat excessive bleeding after birth. Other times, a lack of basic infection prevention supplies would expose mothers and babies to serious postnatal infections that turned fatal.

As a midwife, there was only so much I could do to save women and children's lives. I realized that in order to change the situation, the health care system needed to be strengthened. I saw that advocacy for maternal, newborn, and child health (MNCH) funding and policies would be critical, as this would help address broader challenges such as stock outs of essential medicines and supplies, as well as health work force shortages. The presence of a health facility does not automatically translate to availability of quality MNCH services.

Earlier this year, I joined PATH as a county policy and advocacy officer, serving Kakamega and Homa Bay counties. I discovered that it is an interesting time for health advocacy in Kenya. The Constitution of Kenya 2010 not only guarantees every citizen the right to the highest standard of health, but also devolves to the counties health services including policy implementation, service provision, and budgeting.

This new structure brings health care decision-making much closer to citizens, and has provided fresh opportunities for civil society and other county-level stakeholders to engage in budget and policy processes. The Constitution provides for citizens to hold their county governments accountable—even in budgeting processes. This is critical for counties like Kakamega and Homa Bay, where too many women, newborns, and children get sick or die needlessly because they lack access to basic services like skilled birth attendance, clean water, malaria prevention, or childhood immunizations.

To mobilize citizen support in Kakamega, PATH helped form an Alliance of twenty civil society organizations (CSOs) to take collective action. Among the Alliance's goals are to: increase investment in MNCH through enhanced citizen participation in the county budgetary process; ensure that national MNCH policies are adapted at the county level and that county MNCH policies are implemented at various levels within the county; and advocate for equitable distribution of lifesaving MNCH equipment and supplies in all sub-counties; and augment the number of health workers at the community level. 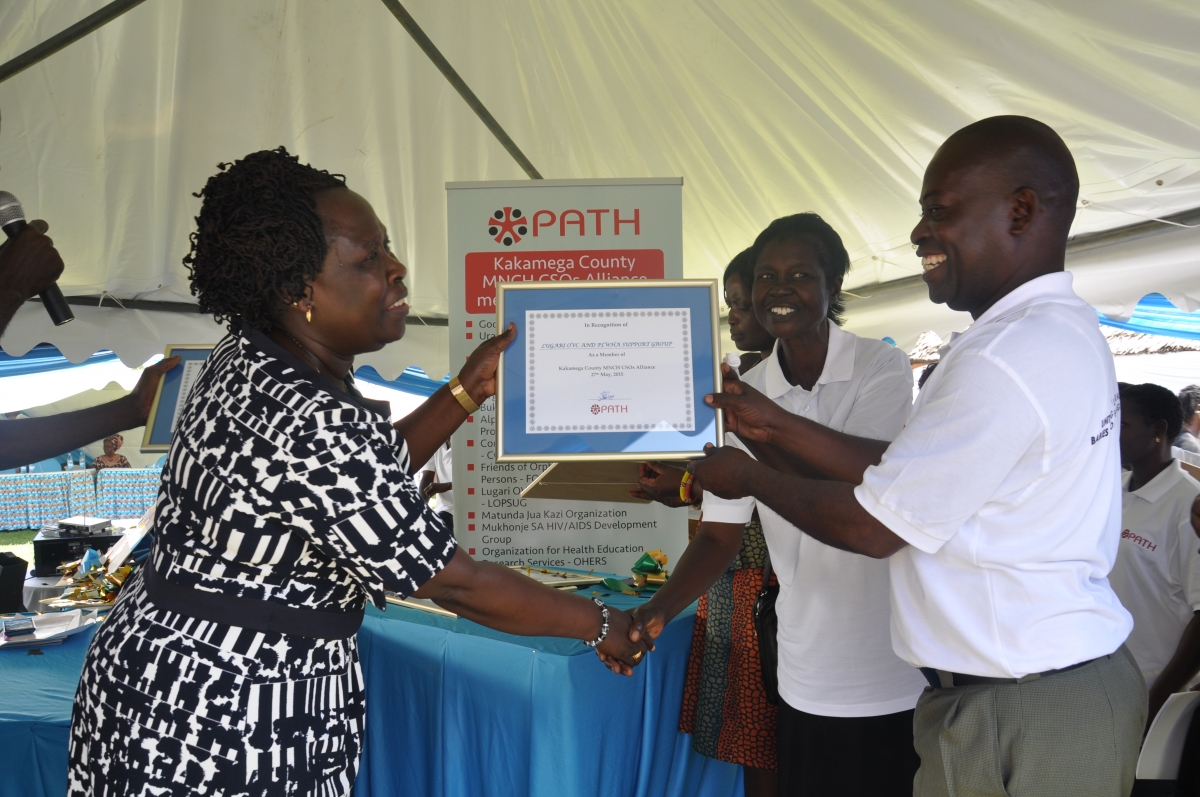 Kakamega's First Lady, Mrs. Priscillah Oparanya hands over a certificate to members of the Alliance during the launch event.

The Kakamega CSO MNCH Advocacy Alliance was formally launched in late May, and galvanized numerous commitments. We brought more than 150 high-level officials, health practitioners, and community leaders from different sectors. The County's First Lady officiated the event and was joined by the County Minister for Health in pledging to support the MNCH agenda in the county. Several County Assembly budget committee members committed to prioritize health in the budgeting process, with the chair emphasizing that “we should have zero deaths of children in Kakamega County… when a child or mother dies in Kakamega…that is carelessness on policy. Whatever budget you bring, I will make sure it goes through.”

Although our Alliance is in its infancy, we have already made important gains. For example, we have increased engagement between relevant decision-makers and stakeholders. The Alliance discovered that there had been little dialogue between the technical staff at the Ministry of Health (MOH) and the members of the budget and health committees of the County Assembly, resulting in low prioritization of MNCH by these officials. Through the launch event and subsequent meetings, the Alliance has actively convened both parties to spur policy discussion, and now both the MOH and county assembly members see the Alliance as an important link in the health budgeting process.

Another key role of the Alliance has been to bring new sectors to the table. We invited the Minister for Water to the launch event. At first, the Minister had trouble understanding why he needed to attend an MNCH function. The alliance made the case that clean water is essential for MNCH from the facility to the village—from preventing infection in women and newborns during labor and delivery, to avoiding diarrheal disease among children. Now, the Minister of Water is a new ally in our quest to increase prioritization of MNCH in budgets and policies.

The Alliance's most important work lies ahead. We must build on the momentum from the launch and hold county government officials accountable for their commitments to MNCH. At the end of the day, I am inspired by the progress we are making in Kakamega, and will soon make in Homa Bay—where PATH and partners are building a similar CSO alliance. While I will always be a midwife at heart, I am proud to be part of a group of committed citizens who are actively influencing decision-makers to improve funding and policies so that no mother or child dies from a preventable death.