A major step forward in the journey to defeat rotavirus diarrhea 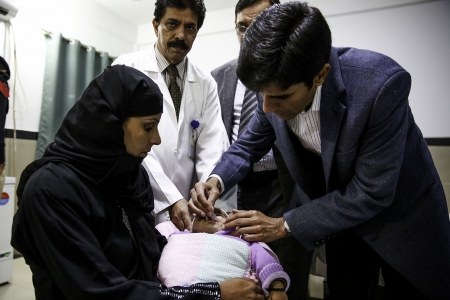 Last week, Punjab province in Pakistan introduced rotavirus vaccine into its routine childhood immunization program. This is such a major step forward for our global goal of reducing rotavirus mortality and burden!

Over 40 percent of rotavirus deaths occur in the Asian region, yet the implementation of these life-saving vaccines has lagged behind other regions such as Africa and Latin America. Following India’s national introduction in four states in early 2016, Pakistan is only the second country in South and Southeast Asia to introduce rotavirus vaccines and the first to do so with Gavi support. While the recent launch in Pakistan is subnational, plans are in place to rapidly expand rotavirus immunization to the rest of the country.

India and Pakistan join the list of over 80 countries worldwide, including nearly 40 low-income countries in Africa, Eastern Europe, Latin America, and the Middle East, that have introduced the vaccines. Yet the significance of these two large countries is immense. India and Pakistan are reported to have some of the highest rotavirus mortality globally and are two of the five countries with highest numbers of deaths. Rotavirus vaccines here will play a significant role in measurably reducing rotavirus deaths in Asia.

As someone who has been an advocate in the fight against rotavirus and the deadly, dehydrating diarrhea it can cause for over 20 years, this new introduction—along with every other country introduction—is a major cause for celebration.

Champions in several developing countries that pioneered the pathway to adopt rotavirus vaccines—such as Nicaragua, Ghana, and Malawi—led the way to generate, collect, and share the evidence needed to support global recommendations and national introductions. Scientists and advocates in Nicaragua, for example, played an essential role in setting the global standard for integrating rotavirus vaccines with other diarrhea prevention and treatment measures, such as water and sanitation improvements and oral rehydration solution. Researchers in Ghana and Malawi, the first two low-income countries in sub-Saharan Africa to introduce the vaccines with Gavi support, helped generate the evidence needed for the WHO recommendation for rotavirus vaccines in all countries.

Today, countries that have introduced the vaccine are seeing dramatic decreases in diarrhea-related deaths and hospitalizations due to rotavirus among young children. In order to maintain progress and protect all children from rotavirus, we need to continue the efforts started by these trailblazing champions. Pakistan is taking a great step forward for the South Asian region this week, and several low-income countries—including Bangladesh, the Central African Republic, Cote d’Ivoire, and most recently the Democratic Republic of the Congo—have applied and been approved for upcoming rotavirus vaccine introduction support from Gavi.

The journey to introduce rotavirus vaccines in more countries in Asia and in the remaining countries in Africa may prove to be long and at times difficult. But as Nicaragua, Ghana, Malawi and many other countries have shown us, the benefits for our children and our world are too great to pass up.

Scientists and advocates from Nicaragua, Ghana, and Malawi mentioned above are featured in a new DefeatDD video that tells the story of global rotavirus vaccine introduction and health benefits. Watch the video here.