India’s communities still have so much ground to cover 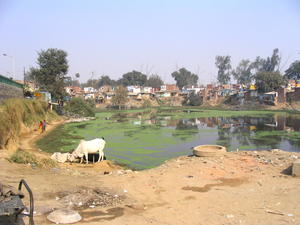 On October 2nd, India celebrated its one year anniversary of the launch of the Clean India Mission. When I think about how the Government of India aligned Clean India Mission messages in all its flagship programs over the past year, especially in sanitation, I cannot help but wonder why the connection between environment and public health is so hard for people to understand.

Over the past year, I revisited places in Uttar Pradesh and Bihar where I had previously supported polio communications, which have become hotbeds of Japanese Encephalitis and Acute Encephalitis Syndrome. The cities began to look the same after a while: between no visible sign of solid waste disposal and the contamination of natural water bodies, these areas are breeding nests for a host of diseases.

The link between the polio virus and open sewage was something drilled into me while working in Uttar Pradesh eight years ago.  So what can help more people, communities and governments alike, understand the connection between the environment and public health is a question that is constantly with me. Only a few months ago Delhi's pollution levels were global news, and now the recent dengue scare has the newly appointed local Government in a twist. None of this is new; it's just several degrees worse.

In Western India, work travel has also taken me to congested Mumbai, where innovative public health projects are faced with Herculean environment issues, even as they try to detect and treat potential tuberculosis patients.

The Prime Minister has clarified on several occasions that India's sanitation goals have not been missed because of paucity of funds, but because the shared vision as a nation on this important issue has been missing. If one were to look at the positives, as this year rolls by, the first few critical things are seemingly in place and Clean India has caught the imagination across the country. Organizations across the spectrum have come together to work and the Clean India Mission has the highest political commitment.

Last October - on the occasion of Mahatma Gandhi's birthday - the Prime Minister nominated well-known personalities across a wide spectrum of politics, films, and sports to be Clean India ambassadors. India has hosted international sanitation summits and these efforts are all to map the way to an ambitious goal - to achieve an open defecation-free India. These efforts will help keep India polio-free, control dengue and Japanese Encephalitis, and curb diarrheal diseases.

Despite the progress, the question still nags: Has India been doing something wrong to still be faced with this situation? What are the barriers to understanding the importance of sanitation?