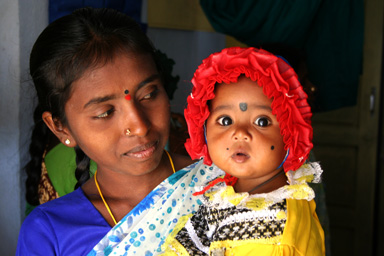 As India announced in January 2012 that it has been polio free for a year, the bigger story that missed the headlines may have been the fact that the Indian States of Uttar Pradesh and Bihar - which have long been the endemic states - have remained virus free for even longer. Uttar Pradesh has been free of the deadly P1 virus for the past 25 months and from the P3 virus for the past 22 months, while Bihar has been free from the polio virus for 16 months.

Between 2007- 2008, the credibility of India's polio campaign was at stake as a result of continued transmission of the polio virus in the high-risk endemic areas of Uttar Pradesh and Bihar. The persistence of polio was despite high coverage of children in the age group of zero to five, with multiple OPV doses.  At around this time, along with the sustained efforts towards complete coverage during the campaigns month after month in the endemic states, polio experts identified the vital link between the efficacy of the oral polio vaccine (OPV) and an infant with chronic diarrhea.

Detailed studies were repeatedly pointing out that diarrhea was not only facilitating the transmission of the polio virus, but severely compromising the efficacy of the OPV. Diarrhea was rampant due to biological and ecological factors such as high population density, poor sanitation and hygiene conditions, unavailability of safe drinking water, and poor nutrition. The direct relationship between diarrhea and the efficacy of polio vaccine was, thus, crystal clear. Kids suffering from diarrhea excreted the intake of polio vaccine dose even before it could build immunity in their bodies. Health officials worried that the higher the number of diarrhea cases among children, the greater would be the inefficacy of OPV and more number of polio cases.

This led the State Governments in both Uttar Pradesh and Bihar, to recommend the use of zinc tablet and oral rehydration salt solution (ORS) during diarrhea. This was seen as a successful two-pronged approach to reduce the duration and severity of the episode and the risk of subsequent diarrhea in children, with the hope that the reduction in the number of diarrhea cases would ensure better efficacy of the oral polio vaccine and hence, would lower down the number of polio cases significantly.

As India holds its breath with this sterling achievement - breaking the transmission of the polio virus - efforts towards addressing the causes of chronic diarrhea is logically the next step. The sophistication of the polio program in India and the dedication of the frontline workers actually have their next task laid right out for them. Polio is spread through the oral-fecal route, just the same as severe bouts of diarrhea.

-- Sushmita Malaviya is Communications Officer in Delhi for PATH's Vaccine Development Program. She previously served as the media consultant to the strategic communications and advocacy team in UNICEF's polio unit in India.