On the Fast-Track to Save Lives from Diarrhea 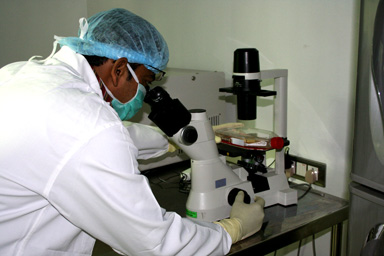 A cure for cancer.  A way to eradicate polio.  A vaccine against HIV.

These are just a few examples of desperately needed medical breakthroughs.  Yet, despite strong support from both scientific and political communities, progress towards these goals, along with many others, has been slow.  So, when a much needed breakthrough becomes available in record time (at least by global health standards), it's cause not only for celebration, but for decisive action to ensure that we take full advantage of the opportunity to save millions of lives around the world.

Today, we have great cause for celebration over recent progress on rotavirus vaccines. But even more, we face a critical need for action to get these vaccines where they're needed most.

Several weeks ago in Johannesburg, I attended the 9th International Rotavirus Symposium in South Africa with the modest community of scientists, practitioners and policymakers who work on rotavirus - the most severe cause of diarrhea, which kills half a million children each year. While this conference occurred with little fanfare or media attention, it was a commemoration of one of the most exciting, collaborative, and fast-moving efforts in recent years to save the lives of children in developing countries.

Four years ago, a rotavirus vaccine was introduced in Nicaragua, during the same year as it was introduced in the US. Historically, it has taken from 10 to 15 years from the time a new vaccine is made available in the industrialized world to the time it reaches developing countries. But this time - as a result of a joint effort by NGOs, donors, the Nicaraguan government and the private sector - that process took less than twelve months.  This record breaking event was the first sign that rotavirus vaccines were on a fast track.

Soon thereafter, large-scale clinical trials were began in Africa and Asia to find out whether rotavirus vaccines would prove safe and effective in children living in the poorest parts of the world. In 2008, the mood at the 8th International Rotavirus Symposium in Istanbul was one of hope tinged with uncertainty, as the trials had not been completed and no official recommendation had been issued for introduction in the countries most affected.

The results from those trials became available in early 2009 and the World Health Organization (WHO) moved quickly to recommend that on the basis of this data all countries should introduce rotavirus vaccines into their national immunization programs. The GAVI Alliance immediately followed suit and announced that they would provide financial support for the purchase of these vaccines for developing countries, most of which count diarrhea as a leading cause of child death. As a result, poor countries around the world are making preparations for vaccine introduction.

Just a few weeks ago in Johannesburg, though, the atmosphere crackled with excitement, as presentation after presentation clearly demonstrated that rotavirus vaccines can have a tremendous public health impact in the world's poorest countries. One by one scientists were moved to express their support for introduction. In the last two years, the trials have unequivocally demonstrated the efficacy of the two available rotavirus vaccines to reduce severe rotavirus infections in the first year of life.

And the evidence continues to mount. More exciting data is coming from Mexico and, now, Brazil, where the number of young children dying from diarrheal disease has taken a significant drop following the nationwide introduction.  Like so many vaccines before, this simple, cost-effective intervention is delivering on its promise to save lives and reduce suffering in the most vulnerable children of the world.

But despite the last four years of massive progress, the most important part of the job - delivery to the most affected countries - is not complete. Rotavirus vaccines risk not reaching the children who need them most unless donors come forward with a commitment of financial support.

To close of the 9th Annual Rotavirus Symposium, the 385 participants from 65 countries ratified a Call to Action that called upon political leaders from developing countries to increase financial support to their national immunization programs, as well as political leaders from developed countries and global immunization partners to scale support to the GAVI Alliance.

I look forward to what the 10th Annual Rotavirus Symposium two years from now will hold. If the last few years are any indication, we can expect to be celebrating the countless children around the world who are alive because they had access to the life-saving potential of rotavirus vaccines.

-- John Wecker, PhD, is the Director of the Vaccine Access and Delivery Global Program at PATH