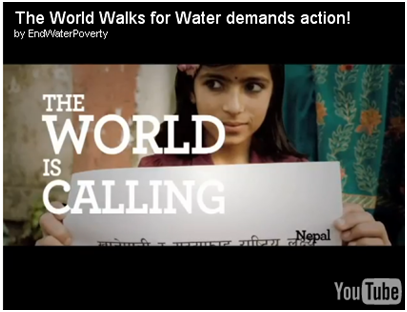 It's an exciting moment for water and sanitation campaigners at End Water Poverty, as we're about to take the footsteps and voices of the 350,000 people who joined the World Walks for Water in March to world leaders at the United Nations Conference on the Least Developed Countries (LDC-IV) in Istanbul. We'll be demanding them to urgently tackle the world water and sanitation crisis, and warn them that if they fail to do so, the fight against poverty in the world's poorest countries will be lost.

It's simply unbelievable that 500 million people living in the world's least developed countries (LDCs) have no access to sanitation, while over 300 million are without clean drinking water, resulting in child deaths, lost school attendance and over-burdened health systems.

The LDC-IV has the opportunity to make firm commitments and outline how to achieve sanitation and water for all in their Programme for Action, and national campaigners have been lobbying their delegations ahead of the meeting to ensure ambition.

In the lead up to the conference, the 350,000 campaigners took to the streets in over 80 countries across the globe, as part of The World Walks for Water event. Marches took place in many of the LDCs including Liberia, Nepal, Timor Leste, Bangladesh, Uganda and Malawi.

End Water Poverty campaigners are attending the conference to meet with delegations, hosts discussion events, launch a manifesto to leaders and hold a World Walks for Water for conference participants, so they too can begin to understand the plight of millions of women and girls forced to walk for water every single day. Hopefully some very high profile people will get involved!

Do keep track of our progress, which you do can so easily on twitter, and wish us well!

-- Don't take our word for it. See what clean water and sanitation did for a school in Bolivia.