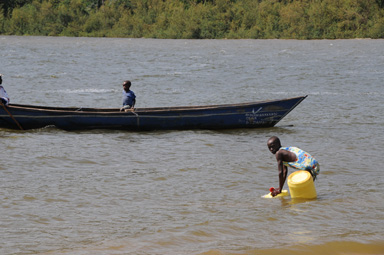 One of the simple pleasures of making field trips to rural Kenya are the meals served at road side restaurants.

These meals are fresh, fast and finger-licking good! Often served in modest (read inexpensive) road side eating houses, just enough dishes are made for each day because such establishments do not have refrigeration equipment. In fact, most equipment and furniture is a modification of "modern" equivalents enjoyed at other more urban or plush places.

While on a recent trip to Nyanza province in Kenya, my team and I stopped over at Dani's, a popular joint in Ahero, a small town just before Kisumu city. Dani's (meaning grandmother) is famous for free range chicken served with a local corn meal called ugali. Once we had placed our orders, we trooped over to the hand washing station. This simple task of washing our hands with soap sparked a most interesting discussion.

For a long time, there was a popular saying among the locals of this community that said, “pi onge gichung' marach.”  Loosely translated, this means that water would never cause any harm because “it has no bad intentions.” This saying totally threw me off (as I'm sure it has most of you!) and so I sought further explanation. Apparently, for a long time, this belief was held true and demonstrated by the community's water and sanitation practices.

Take, for example, activities upstream such as watering cattle, irrigation or laundry (remember, this is in the rural setting where laundry was done in rivers and streams). Regardless of what activities took place upstream, the people downstream would use the water for whatever they needed to, because pi onge gichung' marach, so no harm would come to them. Open defecation was for a long time the norm here, so when fecal matter made its way into streams and rivers, those downstream would use this water regardless, even for domestic use such as cooking and drinking. It therefore comes as no surprise that the Province has one of the highest diarrhoeal disease prevalence rates in the country.

Culture is crucial in all aspects of our lives. With regard to health and encouraging healthy behavior, it is important to consider which cultural practices might inhibit interventions. Take the case of prevention and treatment of diarrhoeal diseases against a backdrop of cultural practices that do not believe in water borne diseases. Could combating retrogressive cultural practices be the silver bullet towards achieving global health? Maybe, maybe not, but it sure plays a more important role than many give credit for.