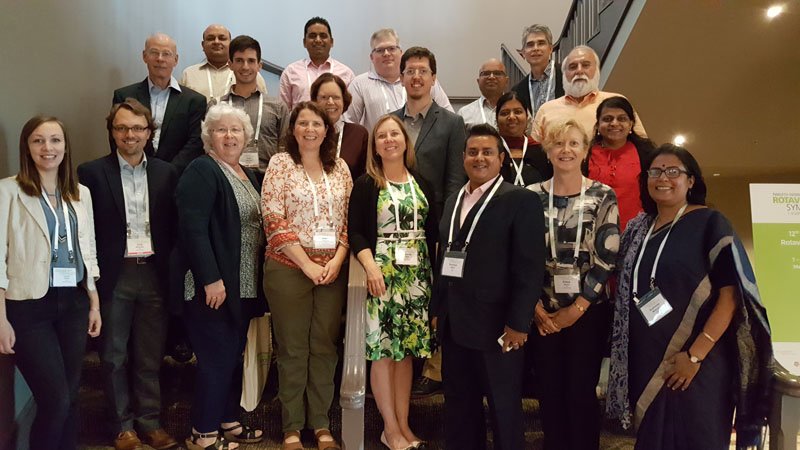 In the final battle against polio, India was often clubbed with Nigeria, Pakistan, and Afghanistan.  At the 12th International Rotavirus Symposium, it struck me that India is now clubbed with Nigeria, Pakistan, and the Democratic Republic of Congo faced with yet another challenge. These four countries account for half of the global diarrheal disease burden.

As WHO observes 10 years of the rotavirus vaccine helping save millions of lives, and the coming availability of several new rotavirus vaccines, the 2016 introduction of ROTAVAC® in the Universal Immunization Program in India was warmly welcomed by the group of over 350 experts and scientists who had gathered for the biannual event.  If India is now polio-free, could it be possible that the introduction of the rotavirus vaccine will get the country off this list, thus having a big impact on global diarrhea burden?

Held in Melbourne, Australia earlier this month, the symposium honored Professor Ruth Frances Bishop, the Australian virologist who was a leading member of the team that discovered the human rotavirus in 1973. The revered scientist was present through the three-day meeting, connecting with the large community of people who have built upon that discovery to benefit more and more children across the world. In countries where the vaccine is widely available, dramatic drops in hospitalizations have been telling their own compelling story. In countries that have been supported to manufacture next-generation rotavirus vaccines, there is greater definite hope that even more children will be protected from debilitating episodes of the disease.

While we worked with UNICEF supporting the polio eradication program in India, the fact that history was being scripted never escaped us. India polio free? The urgency to get the job done was felt by the global and national communities, as well as those right at the cutting edge.

On the sidelines of the Rotavirus Symposium, the question also came to my mind: If the vaccine is bringing down the burden dramatically, would we need the vaccines in the future? It's a great team I work with, and they were quick to educate me. The answer was an affirmative “yes.” Rotavirus CANNOT be eradicated. The virus will continue to be in the environment in developed and developing countries. With neighboring Pakistan having introduced the vaccine and Bangladesh very close to doing so, India could not really afford to lag behind. Children dying of a preventable disease? Let's not let that happen.