The case for pooetry, and silliness about a serious issue Skip to main content

The case for pooetry, and silliness about a serious issue 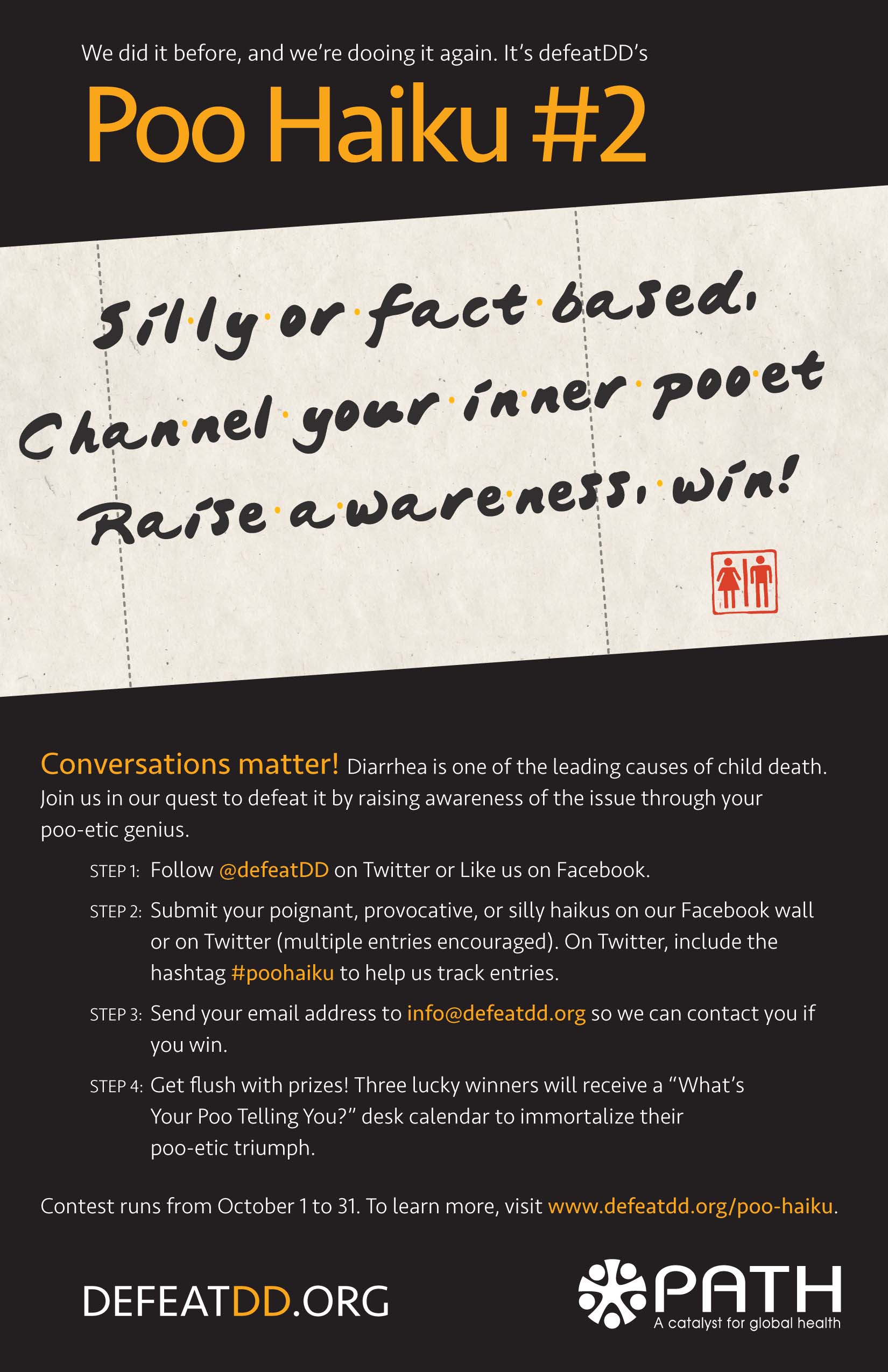 Update: The contest is closed, but the conversation shouldn't be! Keep on sharing with the hashtag #poohaiku. For inspiration, see the winning haikus here.

What inspired us to create the Poo Haiku Contest? We couldn't have said it better than @sailpro99:

Everybody poops / but not everybody knows / that poo can kill, too.

Raising awareness that diarrhea is a leading killer of children is our central focus at defeatDD.org. Here in the US, we have the luxury of laughter, because diarrhea is merely an inconvenience rather than a fatal threat.

But is it okay to joke about diarrhea, a serious health problem for so many? When I was a newcomer to PATH, I was surprised by the levity with which my colleagues approached the issue; they welcomed me to my place on the “Poo Crew” and quipped that we don't really do anything but “talk sh*t” all day! But @oh_mara spoke truth when she said:

It's more indecent / to let kids get sick from poo / than writing this tweet.

Many of the puns exchanged in our office banter have since made their way to social media, and I've learned that humor has the power to spark conversations that catalyze change. Last year's inaugural Poo Haiku contest was an experiment that became a resounding success; we received more than 100 entries and lots of support and awareness for defeating diarrheal disease. When we announced that we were running the contest again this year, responses were enthusiastic, and we're hoping even more participants will join the movement!

Saving children's lives from preventable illness can sometimes seem like an overwhelming endeavor, but it's heartening to know that laughter and creativity can not only boost our spirits, but generate meaningful conversation. Isn't it great to know that making the world a healthier place can be fun, too?

Big change can start with a few strategic syllables. Will you join us?

We have all the tools. / Combat diarrheal disease / Do your part. Re-tweet!!  - @SumDP

Update: The contest is closed, but the conversation shouldn't be! Keep on sharing with the hashtag #poohaiku. For inspiration, see the winning haikus here.