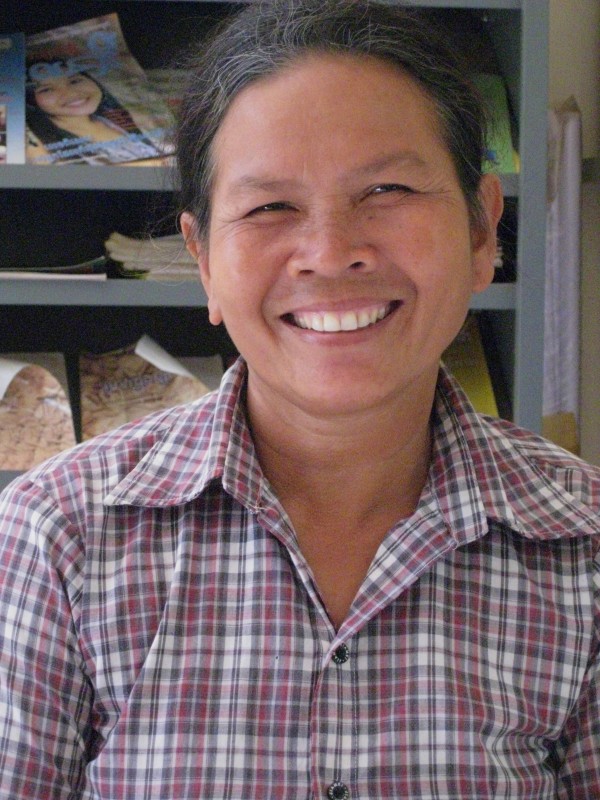 In Cambodia, an innovative idea to treat pneumonia and diarrhea at the same time—profiled in this post—was so successful that the Ministry of Health plans to join with us and UNICEF to extend the project throughout the country. But the project's future wasn't fully assured until just last month, when PATH contributors generously gave us support to help carry the work toward scale-up. Thank you!

Weaving between homes in the village of Duan Tom, trying to avoid slipping in the mud, Yeksim Chea talks animatedly about the heavy rains: how they've made it tough for villagers to get to the health center, how families are drinking contaminated water. The flooding means more disease, especially diarrhea and pneumonia, a duo responsible for 40 percent of the deaths of young children in Cambodia.

Yeksim is vice-chief of this village in central Cambodia. She's also a village health volunteer and part of a PATH project that's taking a unique two-in-one approach to curbing diarrhea and pneumonia.

From Phnom Penh to Duan Tom

To reach kids in Duan Tom, we began in Phnom Penh, working with the government of Cambodia to draft a national policy that addresses diarrheal disease and pneumonia. The new policy incorporates up-to-date prevention practices, training for health workers, and easier access to lifesaving treatments.

With a draft in hand, we needed to show that what looked good on paper works in the village. We chose one province to train health workers—from hospital staff all the way down to village volunteers—to prevent and treat diarrhea and pneumonia.

Signs to save a life

Yeksim was eager for the training and committed to bringing what she learned back to Duan Tom. “During the four years that I've been vice-chief of my village, pneumonia and diarrhea among children have been the biggest health issues,” she says. “Many parents don't know how to prevent the child from getting sick, and they certainly don't know the symptoms of when a child has a cold versus when the child has pneumonia. If parents knew the signs of these illnesses and when to bring their children to the health center, many children would not have to die.”

Yeksim herself wasn't aware of all the symptoms of pneumonia until she took the training. When she was shown a picture of a child with a swollen chest, she realized her five-year-old neighbor had severe pneumonia. As soon as she returned to Duan Tom, Yeksim convinced the boy's mother to take the child to the health center for treatment.

While parents can't control the rain, when armed with information they can prevent severe illness—and that's what Yeksim offers them. At classes for mothers and other caregivers, she passes along what she's learned about good nutrition and hygiene. She also reminds them, “Good health means families spend less money on medicines that don't work and helps reduce poverty.”

Cambodia's new national policy equips health centers with oral rehydration solution (ORS) and zinc to treat diarrhea. In a bold step, it also puts these lifesaving tools in the hands of the village health volunteers who see parents and kids on a daily basis. Zinc can reduce the severity and duration of diarrhea, but in most countries, it's regulated as a drug and can only be distributed by licensed health professionals and pharmacists. Now parents in Cambodia can get it directly from volunteers like Yeksim, saving precious time.

“The introduction of zinc has stopped most of the cases of diarrhea,” Yeksim says. “I'm very happy when I see the kids are healthy.”

The integrated approach works: fewer children are arriving at local hospitals with severe dehydration or pneumonia. Now Cambodia's Ministry of Health is partnering with PATH and UNICEF to take it nationwide, with plans to reach more than 1.6 million children by 2014. Nature may be unpredictable, but we're determined to keep diarrhea and pneumonia from threatening young lives.