Becoming open-defecation free: For Bangladesh, it was strong political will 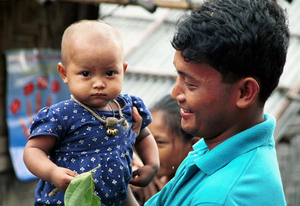 BRAC, based in Bangladesh, is the largest non-governmental development organization in the world, measured by the number of employees and the number of people it has served. Formerly known as the Bangladesh Rural Advancement Committee, BRAC was established more than four decades ago offering a broad array of programs to reduce poverty.

In the south-east Asian region, Bangladesh is often quoted as a model for effective for water, sanitation and hygiene (WASH) initiatives, and BRAC's own WASH program, initially aimed at achieving Millennium Development Goal 7 (reducing the proportion of people without access to safe drinking water and basic sanitation by half), lives up to this standard. Since 2006 the program has provided sustainable and integrated WASH services in rural and isolated areas, breaking the cycle of contamination caused by unsanitary latrines, contaminated water, and unsafe hygiene practices, including open defecation.

DefeatDD caught up with Md Akramul Islam, director of BRAC's WASH programme, at the World Toilet Summit (WTS) in New Delhi in January, where BRAC was recognized for its significant contributions to the sanitation sector in Bangladesh. Over eight years, the BRAC hygiene and sanitation programme has reached more than 66 million people, about half of the rural population of Bangladesh.

What would you attribute to helping Bangladesh bring its open defecation from 42 percent in 2003 down to three percent in 2014?

Akramul Islam: Strong political commitment in the early 2000's, along with the sustained involvement and engagement of the local government; civil societies (NGOs) and private sectors; and also stakeholders' participation and collaboration at the village level. We facilitated a bottom-up approach in participation and planning with strongly representationby the poor and women as well as other rural institutions.

How have men contributed to this remarkable achievement?
Akramul Islam: BRAC provided WASH services in 250 sub-districts—which is 40 percent of the country's population—through community involvement.  It established Village WASH Committees (VWCs) in every single village in those 250 sub-districts with 11 members (six women and five men) to help educate and empower the community, map WASH requirements, and ensure WASH services and use of facilities. These members play a central role in providing hygiene education, identifying targeted clients and their access to safe water.

Besides that, BRAC involved others, like school teachers, students, Muslim religious leaders, village elites, and local government representatives to support and contribute to these efforts. Over 18,500 religious leaders were involved in delivering sermons across the country, not only to provide hygiene messages, but also to promote men's role in domestic chores to reduce women's work burden.

In your experience what are the steps to success?

Akramul Islam: Continuous efforts need to be made to create demand, ensure supply (infrastructure) by developing rural sanitation centers, and improve use by regular cleaning and maintenance. Only this will simultaneously ensure meeting the demand that is generated through behavior change and infrastructure (the supply side).

For example, from 2006-2014, we co-financed (for developing ownership) building of separate toilets for boys and girls in over 4,900 secondary schools, complete with water and waste disposal facilities to cater to girls' menstrual needs. Teachers were trained and this helped maintain facilities.

How do you think Bangladesh will achieve its last mile to become open-defecation free?
Akramul Islam: Through continued hygiene education of underprivileged people - including the extremely poor, floating populations, and those living in slums - and by providing financial support to the extremely poor. Beside these, appropriate and affordable technologies in coastal and water logging areas are also needed.