The incidence, aetiology, and adverse clinical consequences of less severe diarrhoeal episodes among infants and children residing in low-income and middle-income countries: a 12-month case-control study as a follow-on to GEMS 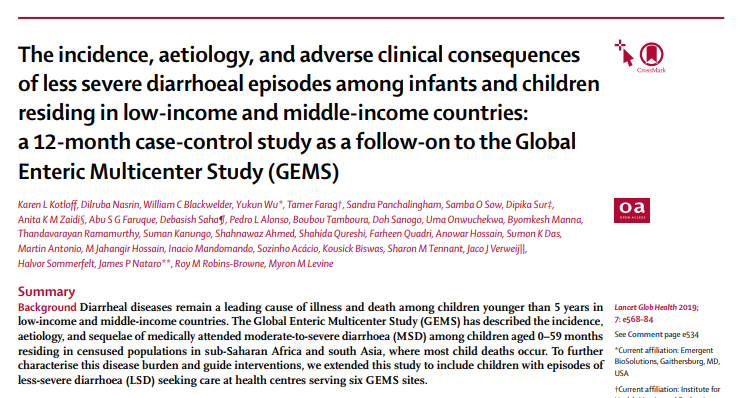 A new study in The Lancet Global Health, published alongside this commentary, summarizes a 12-month case-control study conducted as a follow-on to the Global Enteric Multicenter Study (GEMS). Unlike the original GEMS study, which included patients from low- and middle-income countries with moderate-to-severe diarrhea only, this analysis also includes those with less-severe diarrhea (LSD).

The study found that participants with both more-severe diarrhea (MSD) and LSD had significantly more linear growth faltering than controls at follow-up - implying that the full spectrum of adverse clinical and nutritional outcomes of diarrheal disease is much larger than previously realized. The authors conclude that because MSD and LSD have similar etiologies, interventions targeting rotavirus, Shigella, enterotoxigenic E. coli, and Cryptosporidium might substantially reduce the diarrheal disease burden and its associated nutritional faltering. 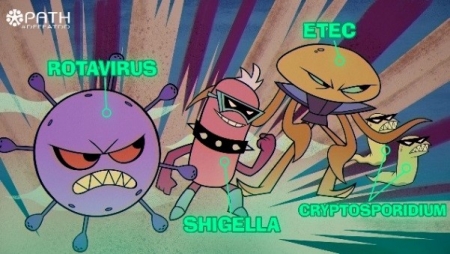 A reanalysis of the Global Enteric Multicenter Study (GEMS)
Together, only six pathogens cause nearly 80% of infections. In descending order of attribution, these culprits are Shigella, rotavirus, adenovirus, ST-ETEC, Cryptosporidium, and Campylobacter.