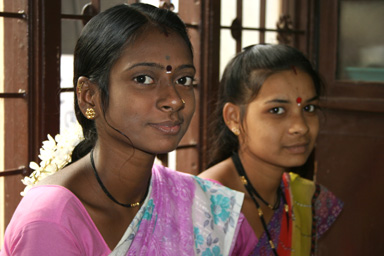 Overcoming taboo can be pretty tricky with teenage girls.

But given the facts—like frightening stats that convey the fear and harassment girls confront every day in schools without appropriate facilities, or the availability of simple solutions to overcome the global burden of diarrhea—the students at Holy Names Academy, a private college preparatory school in Seattle, WA, responded with sound insight… and a healthy dose of optimism.

Poop was the first topic discussed during the PATH representative's presentation during class, and I admit, I was not excited to talk about poop. I kept asking myself, why are we in here when there are a million other things that I could be doing? I kept thinking poop was the last thing I wanted to talk about. As the representative went on, she began to tell us that 1.3 million children DIE of diarrheal disease each YEAR. What? I thought she was kidding. So again, I heard the demographic, 1.3 million children die each year of diarrheal disease.  This had never come into my life before this; I knew that diarrhea was a problem, but I did not think that people would actually die from it. I almost never hear of people dying of diarrheal disease in the United States, so I simply brushed it off because it did not apply to me.  As the representative went on, she explained how easy it is to treat and the many inexpensive ways to prevent it. I cannot imagine my life with this disease and I hope this will become as abnormal to people around the world as it is to me. We complain about vaccinations, but one vaccination against rotavirus can mean life to many people around the world.

This year's Global Solidarity Week at Holy Names Academy was very motivating and educational. The most memorable day to me was Global Health Day. We got the opportunity to hear from two excellent speakers, who talked about their personal experiences fighting for global health. One of the speakers, Lori Buher talked about her son's battle living with meningococcal meningitis. This was not a disease he was born with but one that he adopted later in life. It changed his life in many ways and he is now living with numerous reminders of this tragic time in his life. This made me realize that a disease like this can affect anyone at any time, even a young teenage girl like myself. The second lady, Deborah Phillips talked about the effects of diarrheal disease around the world. I learned that it is the second-leading killer of children under five, responsible for 1.3 million deaths a year.Before this presentation I had no idea that diarrhea could even cause death. To us living in the United States it acts only as a “bug” that will be gone by the morning. There is no fear of death when someone has diarrhea; however this is not the case in many parts of the world. It was heartbreaking to hear how many innocent children die from this horrible disease each year. I am thankful I got the opportunity learn about these diseases and help create awareness.

The talk about diarrheal disease was very enlightening and definitely an illness that does not come to the mind right away when the subject is brought up. The disease is very real and affects a lot more people than we think especially those in more poor countries who do not have access to clean water and hydration methods to stop the disease. For us it is not as serious because we have access to close-by hospitals, but other people die because they have not received proper care. Although the subject is taboo it is very real, and something that needs to be discussed because it affects more people worldwide than AIDS, or cancer does. It seems like a common disease easy to get rid of, and it is, with the right equipment. By donating we can help buy special hydration packets that can stop the progression of this disease in 24 hours, and a help someone who is suffering.