The overwhelming benefits of breastfeeding Skip to main content

The overwhelming benefits of breastfeeding 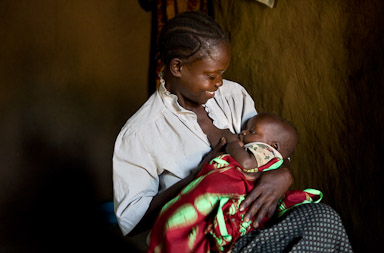 Overwhelming evidence points to undeniable benefits of breastmilk in curbing diarrhea illness and death, yet breastfeeding rates in some of the world's poorest countries remain staggeringly low. Only a third of mothers in the developing world exclusively breastfeed in the most vulnerable first six months of their infants' lives, and in the second six months , breastmilk is part of the diet of only half of babies. It's elemental—yet woefully underused. Perhaps its benefits are still not understood.

In the hopes that solid, quantifiable, and simplified data will help to re-prioritize breastfeeding programs among policymakers in high-mortality countries, our team set out to comprehensively review 30 years of supporting literature and condense it into a digestible package. We want to expand the conversation beyond oligosaccharides and immunological mechanisms (albeit fascinating to our scientific sensibilities) to real-world facts and figures that will move policy forward and bring about real, life-saving change.

The scientific evidence overwhemingly pointed to dramatic benefits of breastfeeding, particularly when it comprises the exclusive diet of children during the first few months of life. This supports the WHO policy of exclusive breastfeeding through six months. Through two years of age, our analysis found that any breastfeeding—whether exclusive, predominant, or partial—offers protection from diarrhea. And when diarrhea does strike, breastfeeding shortens the episode, no doubt providing relief to children and their anxious parents alike.

But what is the real-world implication of breastfeeding benefits? Next, we will turn to our colleagues working with the Lives Saved Tool (LiST). LiST is an exciting new instrument that can estimate the impact of maternal, newborn and child health interventions. Scenarios derived by LiST combine the best scientific information with data on cause of death and current coverage to inform program managers or ministry of health officers as they prioritize investments and plan for updates to the health system.

Earlier this year, LiST demonstrated the potential for dramatic drops in childhood diarrhea deathsthrough integration of several proven tools for fighting diarrhea, including breastfeeding (along with oral rehydration salts, zinc, antibiotics for dysentery, rotavirus vaccine, vitamin A supplementation, basic water, sanitation, and hygiene). While ambitious, a scenario of universal coverage with these interventions in high-mortality countries promised a 92% reduction in diarrhea mortality. That equates to nearly 5 million lives saved over a 5-year scale-up period! Even if universal coverage is out of reach, this points to diarrheal disease control as an essential strategy for reaching the MDGs.

The science is clear, and the global policy is in place. Commitment from countries is the next step to operationalize the consistent findings that promotion of breastfeeding should be a major element of an integrated package of interventions to fight diarrhea. Policymakers, health workers, and mothers must be informed, encouraged and supported.

-- Find out why breastfeeding is considered a pillar of child survival.