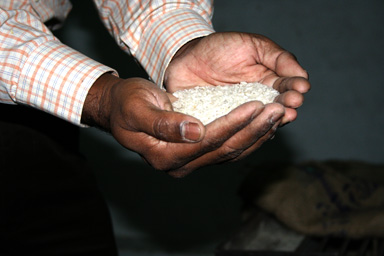 Bread for the World Institute has just released its 2011 Hunger Report, Our Common Interest: Ending Hunger and Malnutrition.

The report is available in print and online for free at www.hungerreport.org. This is the 21st edition of the Institute's annual Hunger Report.

The 2011 report begins with the spike in food prices in 2007-08 that pushed the number of people who suffer from hunger to more than a billion for the first time in history.  Prices have fallen since 2007-08 and so has the number of undernourished people, but as we are seeing in 2010, grain markets are still quite volatile, and so food prices remain a great concern.

For children born in the poorest parts of the world during 2007-2008, higher food prices meant that their families could not afford staple foods let alone the more nutritious foods. A series of articles published in the Lancet in early 2008 on the irreversible consequences of early childhood malnutrition had immediate relevance.  For children who survive early childhood malnutrition, the physical and cognitive setbacks are lifelong, leaving children more prone to illness throughout their lives and reducing their chances of ever escaping poverty.

Most of the report is focused on the global response to the 2007-08 crisis, with emphasis on how the U.S. will partner with poor countries to help them become more resilient to shocks like a sudden rise in food prices.  The 2011 report, like all previous Hunger Reports, is mostly about how the United States can contribute to reducing global hunger.

At the 2009 G-8 Summit in L'Aquila, U.S. leadership was instrumental in gaining the commitment by member nations for $22 billion to improve global food and nutrition security. For its part, the Obama administration developed its own initiative, Feed the Future. Bread for the World, along with several U.S. civil society groups, provided input into the design of the program.

The 2011 Hunger Report argues that Feed the Future is a bold step forward in U.S. foreign assistance, possibly the best opportunity to come along in decades for the United States to contribute to lasting progress against global hunger and malnutrition.  Feed the Future stands out with its dual focus on boosting incomes of smallholder farmers and improving the nutritional status of mothers and children, the groups most at risk of hunger and malnutrition.

Agricultural programming has been largely overlooked as an area of development assistance to promote nutrition. Traditionally, nutrition programming has been administered through food aid in hunger emergencies and through health programs in non emergency settings. Agricultural programming, with few exceptions, has focused on staple crop production. But nutritious foods can also be a source of income generation for smallholder farmers, if there is support for market development.

The Bangladesh Homestead Gardening program, supported by USAID and Helen Keller International, demonstrates how nutrition and agricultural programming can be combined. Bangladesh has one of the highest child malnutrition rates in the world. When the program started, Vitamin A deficiency was causing 30,000 Bangladeshi children to go blind every year. The program provided seeds and technical assistance to families to plant homestead gardens with nutrient rich vegetables, and it targeted women, the primary caregivers of the malnourished children. HKI reported that children in households participating in the program consumed significantly more nutrient-rich foods. Moreover, the households earned on average an additional $8 per month by selling their surplus, and studies showed that families used this extra income to purchase additional healthy foods not grown in the gardens, such as legumes and animal products. The program has been adopted in countries around the world.

The 2011 Hunger Report includes several other recommendations to strengthen Feed the Future and U.S. foreign assistance more broadly. Among them, Congress should rewrite the 1961 Foreign Assistance Actto make clear that poverty reduction and development are key elements of U.S. foreign policy and reduce earmarks to ensure that U.S. development assistance has the flexibility to respond to realities on the ground. U.S. food aid should be improved to allow for a greater focus on nutritional quality, especially to reach infants and young children. In addition, the United States should take the lead in strengthening international institutions that are complementary to U.S. bilateral assistance in fighting hunger and malnutrition.