Lend Your Voice for Safe Water and Sanitation for All 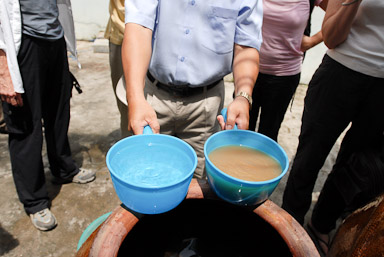 Next Tuesday, March 22, is World Water Day. As the leader of an organization committed to improving the health of communities in developing countries, I am thrilled to see that momentum is growing - across the US and globally - for reaching the poorest in the world with access to safe water and sanitation. Last year I spent World Water Day in Washington DC, where US Secretary of State Hillary Clinton delivered an impressive pledge to US commitment to water in developing countries. Since then, a flagship international aid effort put forth by the Obama administration, the Global Health Initiative, has underscored safe water and sanitation as health priorities. Just this week across the Atlantic, the UK's Department for International Development, as part of its commitment to increasing international aid, highlighted its support for water and sanitation programming within the context of child and maternal health.

Those of us in wealthy countries should also be inspired by the commitments being made by countries that are struggling with lack of access to taps and toilets. Across Africa, for example, governments are acting to develop thoughtful policies and mobilize resources to make water and sanitation services more accessible to their populations. Last year the Government of Kenya included water, sanitation and hygiene in a new national policy to address diarrheal disease control. Ghana recently pledged $750m over five years to addressing sanitation challenges across the country.

But at the same that enthusiasm is high, so are the stakes. Continued progress against diarrheal disease - one of the most common causes of child mortality - is not assured given financial constraints and tenuous political commitment.  More than 70 countries in the world are off-track to meet either the water or sanitation Millennium Development Goal targets.

At PATH, the primary goal of our water and sanitation work is to halt needless child deaths from diarrhea. We do that in several ways: by developing tools and user-informed technologies that allow consumers in low-income countries to have access to safe water; by advocating for better and more integrated policies that bring together water, sanitation and child health; and by aligning water, sanitation and hygiene education with our clinical and community-based efforts to reduce diarrhea.

But we also know that the water and sanitation crisis isn't a problem that one organization, or even hundreds of them, can solve. It's an issue that needs the voices, and efforts, of millions around the world.

Will your voice be one of them? This year, if you have a facebook or twitter account, you can lend your voice for water. Just go to www.waterday.org and sign up to donate your online voice during One Week for Water, a public awareness campaign being supported by a coalition of US-based organizations committed to water and sanitation. So far the campaign has already reached over 500,000. You and your friends and followers can help to make it millions.

In the US, we tend to take clean water and toilets for granted, and when an American child does get diarrhea, it's a minor inconvenience. For children in the poorest countries, though, diarrhea can be a death sentence, which makes prevention through safe water and sanitation that much more critical. This year for World Water Day, tap into your connections and communities to spread the word: safe water saves lives.

-- Chris Elias, MD, MPH, is president and CEO of PATH