Joining the Dots - why better water, sanitation and hygiene are necessary for progress on maternal, newborn and child health Skip to main content

Joining the Dots - why better water, sanitation and hygiene are necessary for progress on maternal, newborn and child health 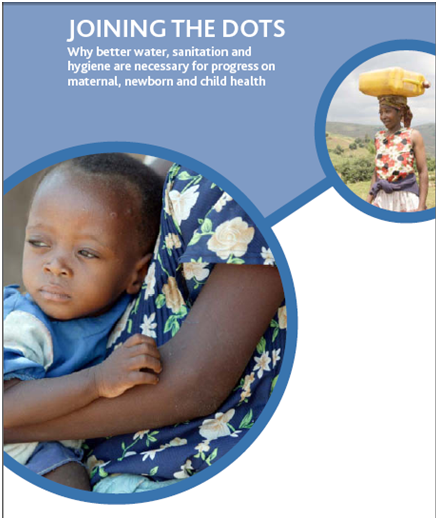 Despite the fact that nearly 900 million people lack access to safe drinking water, 2.6 billion lack access to sanitation, and every dollar invested in this sector gets an economic rate of return of eight, the importance of water, sanitation and hygiene (WASH) is not given the political recognition or funding priority it deserves.

Tearfund's report Joining the Dots - why better water, sanitation and hygiene are necessary for progress on maternal, newborn and child health calls this into question. In this report we highlight the fundamental need of governments to address the WASH crisis and the devastating yet needless human cost of such neglect. As the title suggests we ‘join the dots', making links between WASH and maternal, newborn and child health, or to use MDG terminology, demonstrate the impact of MDG 7 (target 10) on the progress of goals 4 and 5.

A woman on the verge of bringing new life into the world should be entitled to enjoy the emotions of anticipation, hope and excitement. However, for millions of women in developing countries, their main emotion is fear as geography dictates whether they have a skilled birth attendant, in a health clinic, where hygienic practices are the norm. This is critical due to the fact that 15% of all maternal deaths are caused by infections in the first six weeks after childbirth, mainly due to unhygienic practices and poor infection control during delivery. Despite the advances of the twenty-first century, we live in a world where half of all infection-related deaths could be averted if skilled birth attendants adopted hygienic childbirth techniques, yet are not.

The fear does not stop when the child is born. Newborn babies are exceptionally vulnerable to poor WASH, which is one of the causes of the high neonatal mortality rates globally. The mother's choice to breastfeed her child is also critical, due to the tragic truth that a baby not breastfed is six times more at risk of dying from infectious diseases, including diarrhoea, in their first two months of life than those who are breastfed. The fear does not stop as the child grows.

Children are the future. They represent the hope of a new generation. Yet a staggering 93% of the 181 million school aged children in sub-Saharan Africa suffer nematode (worm) infections. Nematode infections have a direct impact on physical growth and impair intellectual development. Poor WASH is wholly attributable to this silent tragedy. Diarrhoeal diseases, of which 88% of cases are caused by poor WASH, kill 1.4 million children under 5 globally. This statistic is staggering, as 40% of these deaths could be prevented by the simple practice of handwashing with soap.

For too long the WASH sector has been neglected, and the life and dignity of millions of women, newborns and children depend on its role being recognised. Understanding the interconnectedness of the MDGs is critical and urgent action is required to end these needless tragedies.