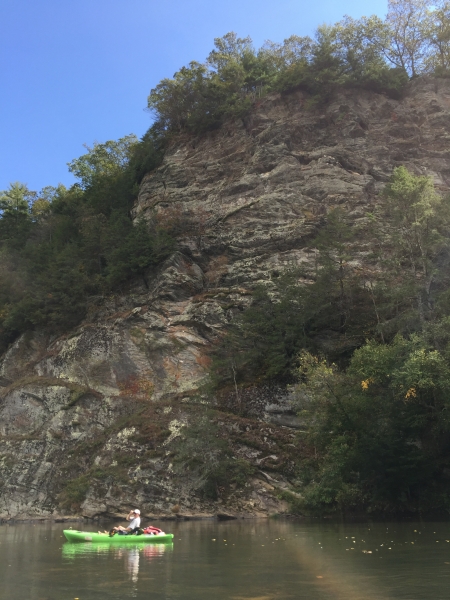 Just prior to starting at PATH, Fred went kayak camping for several days on the New River (one of the nation’s oldest rivers, which flows north), starting in western North Carolina and ending up in Virginia.

I’ll admit that I was predisposed to be excited about my interview with Fred Cassels because of his active support of DefeatDD’s Facebook page. He is modest about his social media know-how, but I see a theme of Fred chasing challenges, whether a new idea or an unexplored hiking trail.

I managed to snag a few minutes of his time – he noted with pleasant surprise that he had a 30 minute break in his meeting schedule for the day – to hear about his new role as the head of enteric diarrheal disease at PATH’s Center for Vaccine Innovation and Access (CVIA).

You’ve been here for a few months now. How would you summarize your job in a sentence or two?

As global head of enteric diarrheal disease within CVIA, I oversee our vaccine projects on rotavirus, polio, Shigella, and ETEC. A lot of what I do, beyond extensive internal meetings, involves communicating with donors and partners: listening to their needs, assessing what the data say, and determining how we can best apply our expertise.

How did you first become involved in the wonderful world of enteric vaccines?

My post-doc was about the oral microbome: how oral bacteria adhere to teeth as well as to each other, and what molecules are involved in this specific adherence. Believe it or not, it’s a similar mechanism for how pathogens stick to intestinal walls, so I was recruited by Walter Reed Army Institute of Research to analyze that process in intestinal epithelial cells and that’s where I got involved in ETEC.

I became involved in vaccine development because I got pretty good at purification (isolating and enhancing key vaccine components) and developed multiple patents in the ETEC field. From Walter Reed, I went on to serve as the chief of enteric and hepatic diseases at the National Institute of Allergy and Infectious Diseases (NIAID), and ETEC was in my portfolio at NIH as well.

What are some of your career highlights so far?

One recent highlight that stands out is my involvement in the Phase 4 study for rotavirus vaccines sponsored by NIAID. What we were seeing is that children were getting a mix of the two available types of rotavirus vaccines in their immunization schedules because they were changing doctors and other various reasons. We didn’t know for certain if this was equally safe and effective, and the Phase 4 study with 1400 infants demonstrated that it was.

What drew you to PATH?

I consider myself a lifelong learner and it’s always been important to me to try to apply what I’ve learned. This field really has a tremendous opportunity to improve lives in low-resource countries and there are spin offs for the higher-income countries, too, for travelers and members of the military. But it’s really gratifying to help facilitate getting these vaccines to the high-burden countries to improve and save lives. That’s what is driving me; that’s what brought me to PATH.

What are some exciting opportunities you see on the horizon in the year ahead?

There’s new interest in Campylobacter in light of new, highly sensitive data that shows that the burden of disease is greater than originally reported, especially when it comes to morbidity (stunting and cognitive impairment). We have a lot of experience in Campylobacter here at PATH so I’m excited about our potential to contribute to this issue. Cryptosporidium is another potential area to consider, since it also scored high in the recent data.

With PATH’s newly established CVIA structure, I think we’re at an important point to become more efficient and better focused and really push things forward. It’s part of what brought me here, the opportunity to be part of this new platform. The leadership group is coalescing now, so when it comes together I think it will be really powerful.