For Gauri and her daughters, access to a toilet was life-changing 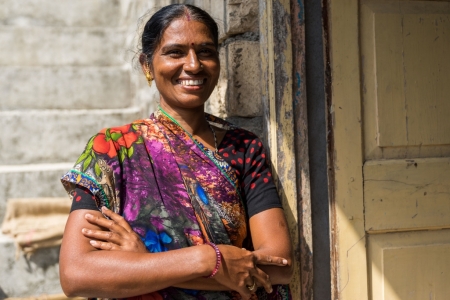 Gauri Behen is an Anganwadi worker* living in Nathej village in Gir Somnath district, India. She is a dalit and has three daughters; her eldest daughter is in her adolescence. Gauri Behen and her daughters never had access to a toilet and faced many difficulties going to the bathroom, having to wait the whole day till it became dark to relieve themselves at risk to their safety. Because of their caste, they also had to make sure that they didn’t defecate close to an upper caste landowner’s land, making it even more difficult for them.

Here she tells us what prompted her to construct a toilet in her home and what she and daughters like best about having access to a toilet.

Aga Khan Agency for Habitat (AKAH): Gauri Behen, can you tell us what you and your family did when you needed to go to the toilet before you decided to construct a toilet?

Gauri Behen (GB): For my entire life before I constructed a toilet I would walk outside our village to the open fields to relieve myself. I remember walking with my mother when I was young either early in the morning or late at night and would do the same with my daughters when they hit adolescence. It was very difficult as we’d have to wait many hours sometimes to go to the toilet and when we had diarrhea it was very uncomfortable waiting. Also, because of security fears, I’d only let my daughters make the journey with me or together when they were old enough to make sure they weren’t harassed. Sometimes we’d get verbally abused by the local, upper-caste landowners for walking through their land to get to a spot where we could relieve ourselves.

AKAH: It sounds like it was very difficult for you to go to the toilet since childhood. Why did it take you so long to construct a toilet for yourself?

GB: I didn’t consider building a toilet for my family as for a long time I thought that it would require a lot of space and be very costly to construct. We don’t have very much money and no land around our house to construct a separate toilet. My realisation that I could build a toilet for not much money and inside my existing home came after I began attending the women’s meetings organised by AKAH where we learnt about hygiene practices and how to go about building toilets in our homes that could be low-cost and long-lasting. When I told the community facilitator from AKAH that I didn’t have land around my house to build a toilet cabin, they told me that if I had space in my home I could construct one inside. After getting AKAH’s inputs on the best design and being assured that having a toilet indoors wouldn’t pollute the rest of the house, I went ahead with constructing a toilet.

AKAH: How long did it take you to construct your toilet, and does everyone use the toilet?

GB: Construction of the toilet didn’t take very long, four days in total. In just four days my and my daughters' lives were transformed! We can go to the bathroom whenever we want and aren’t worried that we will get abused by the large landowners who owned the land nearby to where we would defecate in the open. We all use the toilet and also take cleaning it in turns to make sure it remains hygienic.

AKAH: You are an Anganwadi worker. Have you used any of your knew knowledge about the importance of safe sanitation in your work?

GB: Yes, now that I fully understand the benefits of having a toilet and washing hands before meals and after using the toilet I am encouraging all the children who come to the Anganwadi centre to wash their hands and encouraging their parents to construct toilets so that they and their families do not have to defecate in the open. At the beginning many of them think like I did – that it will be expensive and is not that important – but I tell them about my experience and how it’s made our lives much better.

*An Anganwadi worker is a grassroot village health worker and a functionary of the Integrated Child Development Services - a Government of India scheme initiated to provide nutrition, health and education services to children in the age group of 0-6 years.

In April 2015, Aga Khan Development Network (AKDN) agencies, the Aga Khan Foundation, the Aga Khan Rural Support Programme, the Aga Khan Agency for Habitat and the Aga Khan Health Services launched the AKDN Comprehensive Sanitation Initiative which brings together their expertise in the fields of water, sanitation, community mobilisation, sanitation infrastructure and health to tackle the sanitation challenge in India. The Comprehensive Sanitation Initiative is supporting the Government of India’s Swachh Bharat Mission in 6 states (Bihar, Gujarat, Madhya Pradesh, Maharashtra, Uttar Pradesh and Telangana) where it is facilitating access to sanitation for 100,000 families as well as improving water, sanitation and hygiene in 538 schools and for communities in Patna and Hyderabad through the promotion of community toilets.