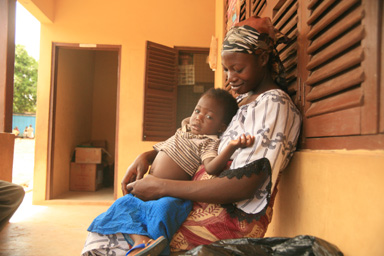 For many of us, the G8 works a lot like the Wizard of Oz:

Lots of smoke, mirrors, big words, and broken promises - but nobody can figure out what the wizard is doing behind his billowing curtains and fancy machines.

So what's behind the smoke and mirrors and why should we care about what happens at the G8 Summit this June?

The G8, or Group of Eight, is made up of the world's most industrialized countries: Canada, France, Germany, Italy, Japan, Russia, England, and the US. They are in regular contact discussing fiscal policy, trade policy, finance, global banking systems, monetary funds, and the like - basically pulling a lot of levers to try and stave off financial chaos in an ever-shifting global economy. Once a year, they come together for a summit hosted by one of the members.

And why should we care? Outside all the financial wrangling going on, there is another very important thing that happens at the G8 Summit each year.  These global titans come together and make grand pledges and promises about how they will invest in the development of the most impoverished countries and communities in the world.

The problem is, grand promises are made, but too often they are forgotten, broken and never fulfilled. But this year's host, Canada, and its Prime Minister, Stephen Harper, are looking to change that.

Harper's vision for the summit is to ensure that the world's most vulnerable mothers and children have what they need to not just survive, but thrive. His call is to clear out the smoke, mirrors, and broken promises and “mobilize our friends and partners to do something for those who can do little for themselves, to replace grand good intentions with substantive acts of human good will.”

Substantive acts for the world's women and their children - I don't think we're in Kansas anymore.

Left off the global agenda for far too long, women and children are finally taking center stage. And with good reason: Each year nearly half a million women die in childbirth and nearly 9 million children die before their fifth birthdays.

Most are dying of diseases and complications that we have been able to treat and prevent for decades in the developed world.  But there is hope: New interventions against postpartum hemorrhage, the top cause of death for women during childbirth, are available and safe to use in even the most remote parts of the world.

And for children the news is even better. Two new vaccines are available to treat the leading causes of childhood's greatest threats:  pneumonia and diarrhea. These killers take the lives of over 3 million children annually. The introduction of vaccines against pneumococcal disease and rotavirus, coupled with existing prevention strategies like exclusive breastfeeding and zinc therapy, could save hundreds of thousands of children each year.

So if we have the technology, the medical interventions, and the know-how to stop these killers in their tracks, what's standing in our way?

Past G8 performance and a trail of broken promises has taught us some valuable lessons. The political will to follow up on these promises is simply not there.

In the end it comes down to those of us who live in G8 countries, to hold our government officials accountable and ensure they fulfill their promises to the world's mothers and children.

In the words of Prime Minister Harper, “Accountability, ladies and gentlemen, is the prerequisite for progress.”

The challenge is ours, and we must demand the curtain be lifted—no more smoke, mirrors, or broken promises.

Here's what you can do:

TAKE ACTION: Send a letter to G8 leaders through Moms Rule and let them know we need to keep our promises to the world's mothers and children.

VOLUNTEER: At Global Action for Children, we are working hard to ensure your voice is heard by your member of Congress. Get the support, information and training you need to make a difference in the lives of mothers and children around the world. To find out more contact Stacy Carkonen at scarkonen@globalactionforchildren.org .