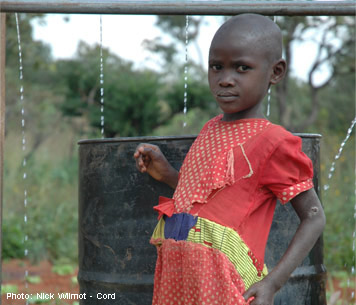 It is perhaps no small irony that the topic of conversation least likely to be the center of a case of verbal diarrhea is diarrhea itself.

Despite the scandalous statistics associated with diarrheal diseases and its impact in developing countries, a discourse on diarrhea is more likely to be met with slightly anxious or nervous laughter; eyes darting to identify the nearest escape route.

This is just one of the reasons why UK based international charities Cord and Tearfund teamed up on Toilet Twinning.

An innovative way to raise awareness of the sanitation crisis facing millions of poor people globally, Toilet Twinning is also a fun way to get people talking and doing something about it.

Toilet Twinning enables people to ‘link their loo' with a latrine in Africa. When they twin their toilet they receive a framed certificate of their toilet's twin, complete with a photo, its location, and its GPS coordinates so they can look it up on Google Maps. Tearfund and Cord use the funds raised to support water, sanitation and hygiene promotion projects.

We know that access to clean water, safe sanitation and hygiene promotion is one of the most cost effective ways of reducing the risks of diarrheal disease; so getting people talking about it is critical.

It's a big job and while we may be a wee way off from open parleys about poop, Toilet Twinning is helping people kick up a stink about safe sanitation in developing countries.

To find out more about Toilet Twinning, visit www.toilettwinning.org.