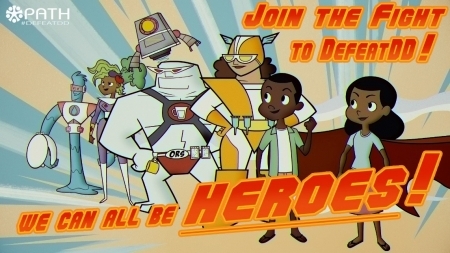 If we have one gripe about social media, it’s that great content slips by too quickly. So please join us for one more look back over the year’s reader favorites before we say goodbye to 2016.

In this blog, we set out to demystify (with an infographic) the invisible damage caused by diarrheal disease: long-term gut damage, called environmental enteropathy. In 2016, we looked hard at the links between enteric infections and malnutrition, and we’ll continue to reinforce this important connection in 2017.

Three cheers for women in science – and extra applause for women against rotavirus! Dr. Ruth Bishop, who first discovered rotavirus, was honored this fall at the Rotavirus Symposium. Her accomplishments have inspired other heroines in the fight to defeat diarrhea, and we pay tribute to a few of them here.

3. Kicking off the Defeat Diarrhoea Initiative in India

The burden of disease of India is great, but there are many great partners fighting back. In this blog, Save the Children India celebrates the launch of their multi-state Stop Diarrhoea Initiative. (Side note: DefeatDD will be visiting some projects in India next year and will have some exciting stories to tell in 2017. Stay tuned!)

2. The true cost of vaccine-preventable diarrheal disease in Africa

Just like our environmental enteropathy infographic revealed long-term health consequences of repeated enteric infections, health economists reveal the long-term financial fallout as well – along with the cost-effectiveness and potential of enteric vaccines. The data tell a remarkable story for countries that have introduced vaccines.

No surprises here! It is fitting that the most popular blog of the year was made possible because of engaged DefeatDD advocates. 2016 saw our most successful Poo Haiku Challenge yet, and it was even featured on NPR!

Farewell, 2016! For DefeatDD blog fans, we are working on a makeover for our website that we think you’re going to love. Look for it early next year; you won’t want to miss it!

Okay, one LAST thing. Before we close our 2016 blog chapter for good… here are a few honorable mentions that were just a few views behind our top 5 list:

Becoming open defecation-free: For Bangladesh, it was strong political will

We can all be heroes to DefeatDD