Cochabamba’s Future Fame May Well Be in the Toilet 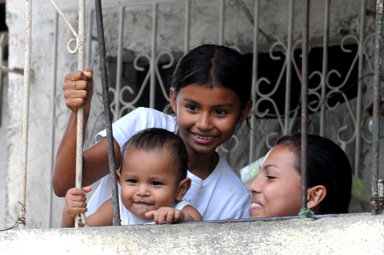 One of the challenges facing peri-urban areas like Cochabamba, Bolivia, is a growing population with little access to basic water and sanitation services. This results in diarrhea and other sickness and sometimes death.

The legal barrier is that many of the peri-urban areas are only marginally recognized by the government. This means that a water and sewage connection is probably many years away at best. In the meantime families have no choice but to purchase their water from water trucks, which is costly at $1 per barrel (26 gallons). Their toilet option is also undesirable: often the side of a wall or a nearby riverbed.

But there is at least one man in Cochabamba who is trying to change the water and sanitation situation for his family. Zenon Soliz is a mason who lives with his wife, two children, sister, and mother in District 9, peri-urban Cochabamba. District 9 is a dusty, hilly settlement and one of the poorest districts in the city. Only about half the households have a water connection and some type of toilet. Zenon is about to help improve that statistic.

About two months ago, Zenon met a man named David who runs a microenterprise in Cochabamba called SiSe, which markets and sells composting toilets. David showed Zenon a photo of the toilets he sells. Zenon, who was in the process of constructing a house for his mom and sister next door to his existing home, was already preparing to build a pit latrine toilet. “I liked the photo of the toilet David showed me,” says Zenon, “so I thought, why not construct the composting toilet instead?” He also liked the fact that the composting toilet can be connected to the sewage system. Another feature that helped in his decision was the water savings. He estimated that the pit latrine would use about half a barrel per month, so he would be saving money on water bills as well.

Zenon's family house and toilet construction are well under way and he estimates that it will be completed within two months. He says he's looking forward to the comfort of the new toilet and that his family will no longer have to use the riverbed.

One of the challenges of reaching higher coverage of sanitation in Cochabamba is the prohibitive cost of constructing a toilet, which can be around $700-$1,000. For Zenon his family toilet is the equivalent of about three months' wages, or about $850.

SiSe has been experimenting with sanitation loans as a way for families to access sanitation and pay the costs of their toilet over time. SiSe is also exploring options to lower the cost of toilet construction and increase toilet marketing efforts, such as the brochure, that influenced Zenon.

This is a long-term effort to be sure, and there are many barriers to overcome, but it is creative ideas like those that led to Zenon's decision, that will take root and ultimately improve the lives of many more people.

John Sauer works for Water For People, a nonprofit organization that partners in Bolivia with local government, communities, schools, civil society organizations, and local microenterprises, like SiSe, to reach high levels of water and sanitation coverage in targeted areas.

-- Check out Water For People's environmental innovation in Bolivia.

-- WaterAid underscores the vital importance of sanitation in Dig Toilets, Not Graves.

-- Visit our photographic collection of commodes from World Toilet Day 2010.