A cholera-free Hispaniola: The clock is ticking Skip to main content

A cholera-free Hispaniola: The clock is ticking 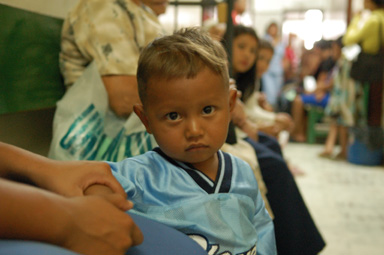 On January 12, 2010, life was forever changed in Haiti. It wasn't only the earthquake damage - the deaths, the destroyed buildings - it was the disaster that ultimately introduced cholera into Haiti. On October 17, 2010, the first cholera death in Haiti's history was recorded. The impact was felt beyond Haiti's borders; the lack of water and sanitation and the quick transmission of the cholera bacteria meant that Haiti's neighbors in the Dominican Republic felt the effects too. Since, more than 500,000 Haitians have been sickened by cholera; death tolls climb into the thousands, heightened during the rainy season. Tens of thousands of Dominicans have fallen ill.

Amid the death and sickness, the governments of Haiti and the Dominican Republic have come together to combat the world's worst cholera epidemic. Just a day before the two-year anniversary of the earthquake, January 11, 2012, the Governments of Haiti and the Dominican Republic announced a call to action for major investment in water, sanitation and hygiene, with particular focus in Haiti. The government leaders, along with PAHO, CDC, UNICEF, and other partners, are calling for the elimination of cholera and the promotion of sustainable development in both countries. The Coalition acknowledges that “improving water and basic sanitation would significantly reduce the prevalence of many water borne illnesses,” cholera included.

And I couldn't agree more. The solutions to cholera - and other diarrheal diseases - aren't glamorous. They are things that I take for granted; clean water and a flush toilet. Yet in Haiti, these simple solutions are virtually nonexistent. Clean, safe water, improved toilets and latrines, and good handwashing practices in Haiti and the Dominican Republic could save thousands of lives. The Coalition that formed in January officially launched the “Declaration to Eliminate Cholera in the Island of Hispaniola” in June.

The commitments and the pledges are promising, but I believe the people of Haiti and the Dominican Republic deserve more. Government, donor, and NGO support must translate into action; realistic plans for infrastructure improvements must be developed and funded in the long term. Access to safe water and improved sanitation facilities must be unequivocally available. In the short term, we have to ensure that simple, cost-effective diarrheal disease prevention is available: safe-water solution to enable families to treat their water at home, and soap to ensure handwashing at appropriate times.

Before that fateful day in October 2010, no Dominican or Haitian ever suffered or died from cholera on Hispaniola. And the fact is that we have the tools to return Hispaniola to a cholera-free place. I think the Coalition and its new Declaration are a beginning. I believe the progress is good and the vibe is positive. However, the positive vibe must translate into accountability and action. The Coalition governments and partners are responsible to the people of Haiti and the Dominican Republic, and I would like them held accountable. We have solutions for the short term and a plan for the long term - it is time to make good on the promise and return Hispaniola to a cholera-free island. The clock is ticking for a Cholera-free Hispaniola by 2022.