Beyond our borders: Why the US Department of Health and Human Services invests in global efforts 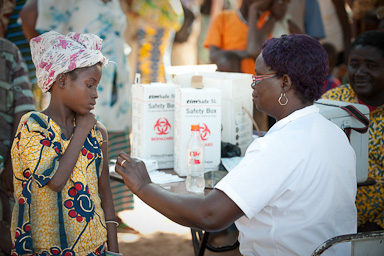 Few initiatives in public health have changed the lives of children and families around the world as much as immunization programs. These simple interventions prevented as many as 3 million deaths in 2011 alone.  And the successes continue.  Each year more and more children have access to lifesaving vaccines, with over 80 percent of children getting all three doses of the diphtheria-pertussis-tetanus vaccine. During the past decade premature death from measles was reduced by 71 percent and from tetanus by more than 90 percent. Polio is on the path to being eradicated.  While clearly there is much to celebrate, we in the U.S. Department of Health and Human Services (HHS) and those of us in the global health community realize there is much work still to do.

Vaccine-preventable diseases still account for a quarter of the deaths in children under five. Pneumonia and diarrheal diseases continue to be the leading causes of death in children, and while vaccines exist, they are not widely available in developing countries. Every year 22 million children go without the full benefits of vaccination, and it is the poorest children who are the least likely to receive immunizations.  Moreover, vaccines are still unavailable for a number of preventable 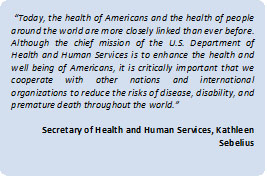 diseases such as HIV, malaria, and other neglected diseases.

Recognizing that infectious diseases do not respect international borders, the HHS Global Health Strategy notes that immunizations are a fundamental part of both disease prevention and of protecting the health of people here at home.  This global awareness is why one of the goals of HHS's National Vaccine Plan is directed towards “global prevention of death and disease through safe and effective vaccination.” However, developing and disseminating vaccines cannot be done by one agency alone.  Our successes come from our close partnership with other U.S. departments and agencies, non-governmental organizations, international organizations, and the governments of other countries.

The development of a vaccine for meningococcal A meningitis is a prime example of one of these successful partnerships. Meningitis is a terrible disease killing one in ten people two days of the first sign of symptoms, and those who do survive are often left with permanent hearing loss, mental retardation, seizures, paralysis, or infection requiring amputation. A partnership between HHS, the U.S. Agency for International Development (USAID), the Bill & Melinda Gates Foundation, the Michael & Susan Dell Foundation, the GAVI Alliance, the United Nations Children's Fund (UNICEF), PATH, and the World Health Organization led to the development of MenAfriVac™. This is the first vaccine developed specifically for African populations and is affordable to low- and middle-income countries at less than 50 cents a dose (compared to more than $80/dose of other meningitis vaccines). It also is the first meningitis vaccine that can be used on infants and is expected to create immunity that lasts at least ten years. MenAfriVac™ is saving lives in African countries where meningitis epidemics have ravaged populations for a century.   While we are proud of this success story, going forward, we need to create more opportunities for this type of collaboration.

Another key part of working towards ending preventable deaths is debunking myths about the supposed dangers of vaccinations. Around the world, hundreds of thousands of children are denied lifesaving vaccinations because of the scientifically disproven but still widespread belief that certain childhood vaccinations could lead to autism. We have also seen global immunization efforts derailed by unfounded rumors. For instance, in Nigeria stories that the polio vaccine was a Western ploy to spread HIV and sterilize Muslim girls led to a mass boycott that resulted in a rash of new infections in the country and spread of the virus to a dozen other countries, as far away as Indonesia. This is unacceptable. Overcoming these mistaken beliefs has become an integral part of our work towards global vaccine access.  Until we reach the day when no lives are lost to vaccine-preventable diseases, we will aggressively continue to develop new and improved vaccines and ensure they are available to everyone in every country.