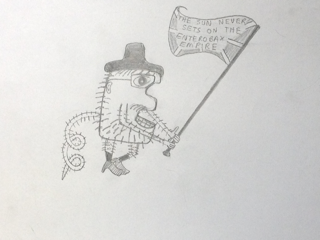 "The sun never sets on the Enterobax Empire." Illustration by Ishir Sharma, age 13.

It was quite a productive week for me at last month's ASTMH Annual Meeting. I met several interesting researchers, attended symposia about the promise of ETEC and Shigella vaccines (with Traveling Poo in tow), and even convinced several scientists to draft and read their very own poo haikus!

I also got an unexpected surprise while chatting with Nagendra Rangavajla at the Pantheryx booth in the exhibition hall. I was gushing about all the great poo haiku contributions of the week, and he mentioned his daughter had recently won first place in the 6th grade fiction category of the Dublin Parents' Resource for Outstanding Dublin Students (PROUD) Creative Writing competition about a topic I might have interest in.

The story is about a villain's determination to successfully hatch an insidious plan after several failed attempts. In the story, he is called Agent E, but we know him by a different name. Can you guess who he is? Read Ananya Rangavajla's full story below.

The doors of my enclosed office opened, then closed with a loud bang. My boss stormed up to my desk, slamming a stack of papers down on my workspace. "Another failed mission," he seethed. "Enterobax Inc. cannot afford this loss. I need you, Agent E., to do this mission without fail and fast." My boss then left, this time more calmly. There was no time to lose. I gathered my most trusted associates. They were resilient, clever, and could face any challenge thrown at them! They were quick on their feet and could adapt to a new environment. Our mission: to attack and colonize a new world and build our own Utopia!!

We pored over the files from the previous failed attempts, desperately searching for clues to make us successful in our colonization efforts. There it was -the ghastly acid lake that had been the nemesis of our predecessors. That was the main obstacle we had to overcome. Fortunately, Enterobax Research Facility was developing the state of the art shields to protect us during dangerous missions. Gathering our shields and other equipment, we headed out into new uncharted territory.

We decided that the best way to enter the target was to take one of the transport vehicles. The green transport vehicles would be the best. The guard there does a lousy job and never checks who is in the vehicle. We stealthily made our way to the departure platform. The green vehicles were parked, and the guard was nowhere to be seen. I hopped in the vehicle first, looked around to make sure that the coast was clear and then told all of my associates to come on board. Suddenly, an immense shadow overwhelmed us as we were picked up and deposited into a dark cave.

White doors slammed shut behind us as a stream of water sent us spiraling into the darkness. I maneuvered the vehicle around until we reached a large gaping hole. Down the hole we went. We clung on to the side railings for support as we tumbled, swinging to and fro. Red lights mounted on the ceiling started swiveling rapidly, as alarms blared constantly. I knew what was coming next. I told my associates to put on their protective shield. After what seemed like hours, we dropped into the acid lake. I pressed a button and all of us were ejected out of the vehicle. I turned around and saw that the vehicle was starting to dissolve in the acid. There were many small objects within the lake, making it hard to move about. Not only were we to worry about the bizarre objects in the lake, but also the other falling objects from the hole we just been through.

"There it is!" one of my associates yelled. I glanced to where he was pointing and saw the elusive entrance. I could sense that everything was going correctly. The access spot was big enough for all of us to enter together. We had done it! We had passed the toughest part of the mission and survived! We gazed at the long, winding halls with the soft walls. The mission was almost complete, I thought. I told my associates to start setting up camp... when I heard thumps. We all looked towards the noise. "Did we have any intelligence of other inhabitants here?" I asked my associates. They shook their heads. The thumps got louder. As I approached closer to the sound, I saw a group of natives. This was unexpected, but on a closer look, I realized that they would be just an annoyance to us, not a worthy foe to our superior technology. Now to start setting up camp and colonizing our new territory. We started to load our toxins into the walls of the intestine. It slowly began to have it's effect.

I was proud of myself! I had commanded a successful mission! What a great E. coli bacterium I am!