Adventures in Diarrhea (I know, I know) Skip to main content

Adventures in Diarrhea (I know, I know) 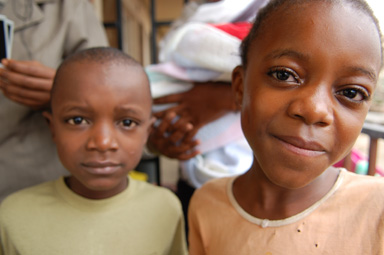 Back in 2007, I read a job description that included a word in the title I had never heard of. The word was “rotavirus,” and the job was for a global health organization named PATH. In my homework leading up to my interview, I learned that rotavirus was a severe form of diarrhea (which, honestly, I found a little icky), mostly affecting children in the poorest countries in the world. At the interview, I learned that PATH was interested in developing a strategy to bring public attention to diarrhea. When I told my husband I was interested in taking the job, his reaction was a raised eyebrow and a response something like, “Diarrhea, huh? Ok, just don't bring your work home with you.”

And so in early 2008, my adventures in diarrhea began. (I know, I know.) During that year, we conducted a survey of global donors and policymakers to find out how important the issue was within the universe of global health issues. We knew that diarrhea didn't top the list, but what we found out surprised us. Interviewees in that study perceived diarrhea as being the least important priority among the international health community, when compared to seven other health issues. And in fact, a bit more research showed that diarrhea was rarely mentioned in the media or by spokespeople in the field. Donor funding for the issue was miniscule, and often those peanuts were hidden within much larger - and more visible - programs. Advocacy efforts were few and far between, and child health and water and sanitation groups shared few coordinating mechanisms. And as the same report confirmed, governments in countries weren't motivated to request funding from global donors because they saw donor priorities as driving the conversation. That held true even in the places where diarrhea was killing more children than anything else.

Fast forward four years. It's March 2012 now, and so much has happened in such a short time. For me personally, diarrhea is no longer an icky word; it's now a reason to get out of bed in the morning (and not just to run to the toilet). While I'll be leaving PATH in two weeks to travel the world and summon a new chapter in my life, it will be with the wisdom, joy and insights that my colleagues and our partners have shared with me over our day-to-day work together.

But much more importantly, I leave this job confident that the landscape today for the issue of diarrhea has changed significantly over the last four years. Because of the commitment of many organizations and leaders, diarrhea is no longer residing at rock bottom of the health priority list. Today GAVI is supporting introduction of rotavirus vaccines in Africa. The Bill and Melinda Gates Foundation's leadership on vaccines, sanitation and treatment like ORS and zinc is proving to be a catalyst for interest and funding. A Global Sanitation Fund now exists for countries with low sanitation coverage, and USAID has prioritized an integrated approach to diarrhea as a major child health issue for future programming and funding.

Advocacy efforts by collaborations like the Health/WASH Network has increased. Our flagship website, defeatDD, and its related social media outlets on Facebook and Twitter, have seen dramatic increases in popularity, as have our efforts to spur dialogue around a tough-to-talk-about issue through activities like our Poo Haiku contest. Campaigns by many partner organizations, including Save the Children, World Vision, WaterAid and PSI have also highlighted the importance of funding for diarrhea control interventions, bringing much needed momentum and public awareness.

Most exciting, in the last four years, countries such as Kenya, Cambodia and Vietnam have developed new national policies and strategies to tackle diarrhea. Malawi has worked to begin the policy dialogue about how better to prioritize the issue at the national level. And as a forthcoming report by PATH and UK-based partner Tearfund shows, other high disease burden countries like Mali and Ethiopia are exploring models of addressing diarrhea that encourage collaboration across sectors and prioritize community-led strategies.

Of course, this is just the beginning. We need more interest, more funding, more coordination for diarrhea - on a level that mirrors the toll that diarrhea still takes on children across the world. Most important, that money and awareness needs to make it to the communities, the clinics, the suppliers, and the caregivers who need it most.

For my part, I will watch with interest as diarrhea continues to gain attention and visibility. And no matter where in the world I find myself, I will continue to do my small part - as my colleague would say - to put diarrhea on everyone's lips. (I know, I know.)

-- Janie Hayes is a communications officer at PATH